How does it differ from Digital Summing?

Let’s start with a more familiar digital summing. This is done inside your computer and using your DAW software such as Reaper, Protools, Cubase, etc.

In digital summing, binary bits (0’s and 1’s) also known as digital data of every track in your mix are added to produce a stereo “mixdown”. These processes are done “mathematically” inside your DAW that employs complex binary arithmetic or floating point calculation to carry out the operation. 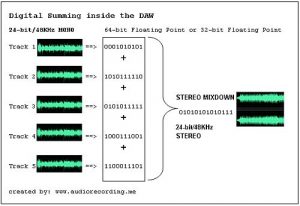 In this article on advantages of 64-bit DAW over 32-bit float digital audio workstation, it reveals that even a 64-bit DAW involves rounding off and estimation of calculation results. These errors however are extremely small compared to using a 32-bit bit floating point calculation.

Based on the above diagram, the factors that can affect the digital summing quality are as follows:

1.) Bit-depth and sample rate – the higher the values, the more accurate would be the digital waveform representation of analog signals. Read this pulse code modulation tutorial for details.

2.) The quality of your analog to digital converters – bear in mind that the source audio is analog and being converted to digital during the recording process. The quality of converters can play a great role in having a perfect/high-fidelity digital capture. Quality converters are often found in professional audio interface and not in consumer-grade soundcards.

In analog world, there are no 0’s and 1’s but only voltages. These are complex sinusoidal voltages that include the harmonics and other elements. Many engineers consider this to add the “warm”, “in-depth” and nice separation sound you get from analog. 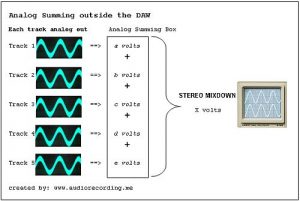 In the above screenshot, the input to an analog summing device is analog voltage (also known as analog audio). If you use an oscilloscope to view these analog audio signals, it would be sinusoidal in nature and the amplitudes are now in voltages and not in dBFS (digital dB).

Each track that would be rendered for analog mix down is summed in the summing device and their voltages are added. While DAW (digital summing) relies on binary math and floating point calculation to do the mixdown, analog summing relies entirely on electronic circuits to do the job. There is no math involved. 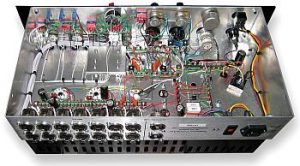 There are two kinds of analog summing devices commonly used in music production: