How to Interface Analog Summing to your DAW (Hybrid)

You can interface analog summing devices to your existing digital audio workstation and come up with a hybrid DAW (utilizing analog and digital technologies). You can try this in your home studio and possibly compare the results of pure digital summing with analog summing from your DAW (also read: “Mixing in the Box vs. Mixing out of the Box“). Here is the extra thing you need:

1.) Analog summing mixer (passive or active) – the number of inputs depends on your usage. In most cases, you should have at least 16 inputs.

High end passive analog mixer can be very expensive; you can use inexpensive analog mixing boards for summing such as Soundcraft. Most home studios may already have an analog mixing console, so you don’t have to buy one if you wish to try analog summing.

The process can be done as follows:

Step2.) Once the mix is done, group your tracks into the number of tracks that match your analog outputs.

Step3.) Configure your DAW tracks output to send to respective analog outputs of your audio interface. This is often done in the routing matrix of your DAW, consult the manual. See below: 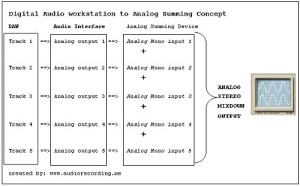 Step4.) Use balance cables to connect each of the audio interface analog outputs (which are your tracks) to the analog summing mixer. This will prevent the addition of noise to your analog outputs. For more details, read this post on balanced vs unbalanced audio.

Step5.) You can then get the stereo output of your mix (which is the mixdown in analog). Compare that with mixes done inside the DAW and see the difference.

1.) Your music production skills and the quality of your music is more important than the summing method. Put more time in improving your production and songwriting skills. At the end of the day, it is still all about the music.

2.) Analog summing from DAW will introduce a lot of conversion that further adds quantization/conversion errors. You might want to consider this tradeoff when deciding to do some analog summing. See the difference below:

As what you can see, you’ll be doing a lot of D/A – A/D conversion (3 stages actually) when you are performing analog summing from your DAW outputs. There is only one conversion stage when summing your mix in digital, and this is an advantage.

Each of these additional conversion stages would introduce errors that accumulate in the later stages; resulting to less accurate digital representation of original recording.

3.) If you want that pure/perfect analog sound, then you need to do everything in analog domain. This implies that the recording and audio mixing are to be done entirely out of the box (no D/A or A/D conversion). There is no loss in signal quality from repeated quantization/digitization and you have that analog sound you need. In this case, you need to build an analog recording studio without computer or DAW.