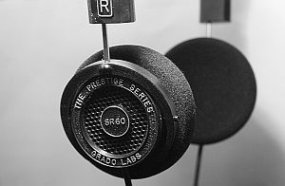 The truth is: engineers does not use headphones when doing a mix, instead they use some monitoring system called as nearfield studio monitors. They only use headphones to do some little checking which would be covered in this tutorial.

Below are the main disadvantages when using headphones and it is why engineers are avoiding it:

1. Headphones cannot faithfully reproduce very low/sub frequencies. This means that if you are mixing using headphones, it may sound with less bass which in fact is very muddy in most monitors/speakers.
What will happen is that you will be tempted further to put more bass on your track by boosting EQ, etc. Thus the resulting mix contains too much bass! It is because you perceived the bass to be low by using headphones when it fact the bass levels might be normal. The correct method would be mixing with a subwoofer.

Even a flat frequency response headphone is not an enough. It is because our ears would perceive it VERY differently. See analogy below:

Notes: There is no known acoustic treatments to minimize interaction of sound waves in your head. Instead; headphone manufacturers are applying EQ (built-in with headphone design) treatments to the headphone so that it will arrive at a flat response to the ear. This is a sample EQ treatments of diffused headphone: