In fact, this is the method used before DAW and computer audio recording become very popular starting in the late 90’s. This has some great advantage by itself:

1.) Without using a computer, the recording, mixing and mastering sessions are less prone to crash and corrupted files associated with computers.

2.) Without a computer, most signals are in analog domain. You will take advantage of the warmth and natural sound associated with analog recordings.

So how are you going to create an “almost” analog home recording studio? I put “almost” in quotes because today, having and possessing all-analog equipment and gears are rare. If you do a quick search in EBay, etc. for those that are selling analog multi-track recorders such as reel to reel, then you cannot easily find a seller. Thus you might opt to find the digital equivalent.

Analog consoles are still common and you can easily find them anywhere so as the outboard gears that process analog audio such as compressors, EQ and reverb.

For most home recording studio purposes, an 8-track recording is sufficient to cover all bases such as drums, guitars, etc. In this way you can record a band to 8 tracks inputs like this way:

Then a total of 8-channel inputs to the mixer are required.

However, buying a mixing console to be used for recording can be tricky and needs and lot of research. The following are the desirable specifications on what to check when buying one:

1.) Each of the input channels should have a direct out. Since the goal is to create an 8-track recording studio, then you need a mixer with at least 8 direct outputs. This is very important for connecting to multi-track recorders which I will be discussing later on.

2.) Make sure it has INSERTS on its channel. INSERTS are important for connecting compressors and other effects on the track in series.

3.) Also make sure that each channel has some AUX return EFX adjustments. These are used to apply the amount of reverbs, etc. on each channel.

5.) Having an aux send and returns on the mixer is very important for adding effects in parallel.

With this, one of the recommended mixers is Soundcraft FX16ii: 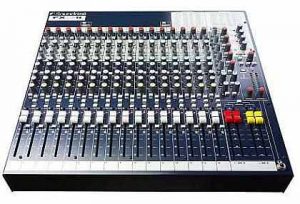