This a very useful theory in the application of parametric equalizer in audio recording, mixing and mastering. The bandwidth (Δf) is given by a relationship:

In addition, the bandwidth is also defined as:

Where f1 and f2 are -3dB points in the peak amplitude for the center frequency (f0). Supposing a frequency boost using a parametric equalizer can be graphically depicted: 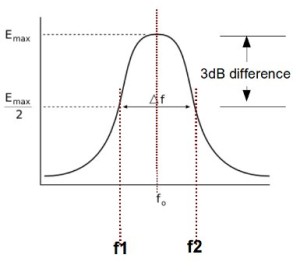 bandwidth q, and the 3dB points

When you cut a frequency level, say for example cutting -8dB on a certain frequency band, the -3dB point is -8dB/2 or -4dB.

In audio mixing, two values are needed to define as EQ setting (like what most EQ suggestions you find in audio recording website). One is the center frequency and the other is the Q. This is because most parametric equalizers need that setting (EQ and Q) to define a frequency adjustment. You might notice that parametric equalizers in Adobe Audition or other DAW do have the same requirements.

Computing f given Q and the center frequency

It would be interesting to compute f1 and f2 provided that you know the Q and the center frequency.

Using all the above equations, the y can be derived in terms of Q:

Take note that y can have two values due to the ±. if you use the – sign, then:

The important is to remember that f2 > f1

Approach to solving f1 and f2, given Q and the center frequency:

Now supposing you use the + sign in the calculation of y then: