The easiest answer is that dBFS is a level meter used in digital hardware or software while dBU and VU is used on any analog audio equipment. The level meters you see in your recording software are entirely in dBFS. There is a HUGE difference between analog and digital meters. This means you cannot simply say for example that -6dBFS is the same with -6dBU or -6VU. In most digital and analog audio equipment you will see two types of meters, the dBFS level meter in digital and VU meter in analog: 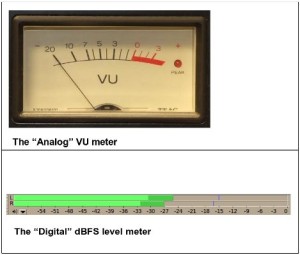 As you have immediately observed, the analog VU meters allow signals above 0VU (see the red section) in the meter. However, with digital dBFS meters the maximum possible signal is limited to 0dBFS. This is the loudest signal that can be represented in digital domain without distortion or clipping. Beyond 0dBFS, the signal will be cut-off resulting to clipping. Since the maximum is 0dBFS and all allowable signals should fall below 0 (-1dBFS, -2dBFS, -3dBFS, etc.) there is no such thing as +3dBFS or any positive values.

In measuring maximum analog level, dBU is mostly used. For example during analog to digital conversion, the incoming signals (in analog form) are measured in dBU units and the output in the converter (in digital form) is now in dBFS scale. How much is the relationship between dBU and dBFS entirely depends on calibration. There is no standard conversion formula in converting dBU and dBFS. For example in US installation, +24dBU is 0dBFS in digital. This is different in other countries and applications. In Europe, +18dBU is 0dBFS. Other conventions are shown below for 0dBFS equivalent:

Supposing you will use the +24dBU as 0dBFS, the relationship between dBFS, dBU and VU can be shown in this graph:

Using the above chart, you can easily understand that 0dBFS (maximum digital audio signal level) is equal to +24dBU in analog. +3VU is roughly equal to -17dBFS and +7dBU.

Applications and Uses of dBFS, dBU in Music Production

2.) When recording analog signals, monitoring for clipping is usually observed in the software. To allow more headroom in digital, maximum peak amplitude is -6dBFS. Since the dBU equivalents for 0dBFS can change with respect to implementation, it is best to look at your digital level meters for monitoring recorded signals.

3.) Mix down maximum peak amplitude is usually in -3dBFS to -6dBFS to allow more headroom in mastering.

4.) It is usually the best practice to never exceed 0dBFS (peak) in digital in any stages of music production (recording, mixing and mastering). Even in mastering, more than 0dBFS cannot be represented by any analog voltages after DAC (digital to analog conversion) hence resulting to audible distortion; unless you intend to distort as some form of creative effect, but it’s not recommended.