In this method, you need two rooms; the drums are isolated and first recorded. Since timing is very difficult for the rest of the band members; the record producer will decide on the BPM (beats per minute); then formulate a click track primarily for the drummer (for details about click track, read the next page of this tutorial). The drummer will be placed alone in a single room with microphones aiming at the drum kit. The guitarist, bassist and the vocalist can be placed in another room with audio output feed to the drummer headphones and vice versa.

So the first aim of the producer is to record the drums clean. The rest of the band members will just play live as a reference for the drummer. After recording the drums are cleanly recorded (without serious bleeding), the rest of the instruments can be recorded one at a time. The vocals will be recorded last. And take note that recording them one at a time prevents bleeding since they are not playing together in a single room.

Second method: Record Guitars, Bass and Drums Together in Isolation

Recording drums, bass and guitars together

In this method, you need 4 rooms. The drummer is not alone in the room but with the guitarist and the bass player. However:

1.) The guitar amplifiers are placed in a different/isolated room with microphones on it. A headphone output would be provided to the guitarist, bassist and drummer. The output audio contains the rough mix of all live instruments.

2.) The bass guitar amplifiers are also placed in a different room with its microphone.

3.) The vocalist would be placed in a vocal booth but the vocal is not yet recorded and will be used as a guide vocal for the rest of the instruments to be recorded.

When the recording starts, the record producer and the engineer would be able to record guitars, bass and drums together while still getting very clean recording without any bleeding. 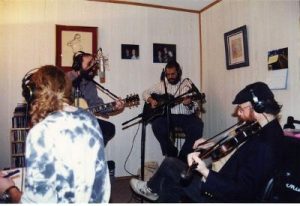 This method is primarily important for those bands that are reluctant to play one at time. The record producer should decide if bands would be best if recorded together or one at a time. In most cases, particularly those bands in the rock, alternative and grunge genre, they are recorded together because they seem to play with more energy with that setup. As usual, the vocals or any overdubs (guitars or vocals) can be recorded last.

In this section, you will know how to set click track in Reaper DAW for your multi-track recording projects. You will also know how to set the project BPM out of a raw demo from the band or artist song.

Timing and synchronization are important issues that the record producer and engineer should deal to produce a successful record. As a background, when the band is playing live without any aid of timing and synchronization device, there are instances where the actual tempo or BPM of the song would slow or speed up throughout the song. Although this is acceptable in live performance, it sounds awkward to listen in professional recordings particularly if the timing/synchronization is severely out of hand. But take note that it’s perfectly acceptable to deviate only just a little from the original tempo or project BPM because this adds “feel” and “natural” live sound of the band record. Being too obsessed with perfect synchronization can make the recording sound too mechanical and unnatural.

How to Set the Final Project BPM for multitrack recording

Click track is the basis of timing for recording an artist/band particularly drums and rhythm instruments such as guitars. It needs to be set based on the song BPM. The song BPM can be decided based on the following steps:

The band can record the demo while playing live together; it can be done with a single condenser microphone placed in the small room where the band is playing. Or it can be done by live band recording using an multi-channel audio interface for better clarity. The raw demo can simply consist of an acoustic guitar and vocals. It’s the tempo/BPM of the song that is important.

Step2.) Once the song tempo has finally been decided based on the rough demo recording; the producer will then attempt to measure the song BPM by using BPM analysis software such as Mix Meister.

Step3.) To measure the BPM accurately, place the mp3 file of the demo song recording inside a folder in your desktop. Name the folder like “demo song”.

Step5.) Browse to the demo song folder and select it then click OK.

Step6.) Mix Meister will then analyze the BPM accurately such as shown below:

If you are now going to start recording the tracks for the song; then the first thing that you should do is to set the click track as the timing basis for the artist and musicians.

1.) Launch Reaper DAW.
2.) Go to Track – Insert New Track.
3.) Go to “Insert” – “Click Source”.
4.) The default settings for Reaper click track is 120BPM with 4/4 time signature and the length is around 10 seconds. You are going to change these values to your project final BPM.

Supposing the song is 124BPM, 4/4 time signature and the length is 3 minutes. Go to the BPM section in the Reaper DAW workspace somewhere placed in the middle to below. Change the details there, for example: 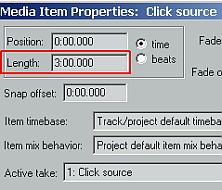 This is how the final project in Reaper would look like (with click track as the 1st track): 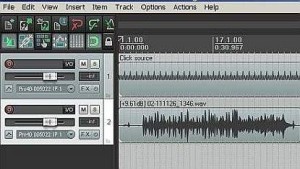 This is a sample of an acoustic rhythm guitar recording made with Reaper using a click track in the background; notice the timing of the rhythm with respect to the click source: