This post will highlight all possible ways on how you can improve the sound quality and clarity of your band practice. Have you noticed that if you are doing band practice whether at your friends’ garage, the overall sound is lacking in clarity despite of the loudness? For example, you noticed that vocals get drowned overall as a result you can hardly hear the vocals despite all the screaming and maximizing the vocal volume. Also have you noticed that drums are so very loud that it can mask all the band instruments sound? Lastly have you observed that the deep bass guitar lines are not even clear and are masked because of loud guitars/drums? 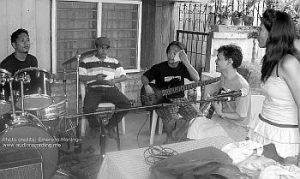 Why the band rehearsal practices sound so muddy?

The root cause of this problem is that the audio frequencies of different musical instruments are not well mixed together. As a result, one instrument tends to dominate another in the same frequency range and the one with lower volume will be likely masked or deeply buried in the overall resulting mix. Unfortunately not all bands can afford an expensive audio mixer (which can solve this problem easily) and a sound engineer for every band practice.

Using the some important concepts in mixing audio, any band can improve the music and sound clarity of their live performance using only guitar amplifiers, bass amplifiers and EQ pedals at a minimum (these set of gears will always be present during any band practice). Check if your guitar, bass and vocal amplifiers have at least BASS, MIDDLE and TREBLE knobs on it. This is how it looks like on a guitar amplifier (using Ibanez TBX150H Guitar Amplifier): 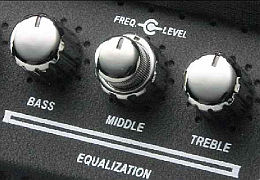 This tutorial will primary focus on EQ adjustments made directly on your guitar amplifier cabinet or guitar/bass EQ pedals which are also common, such as the MXR 10-band graphic equalizer 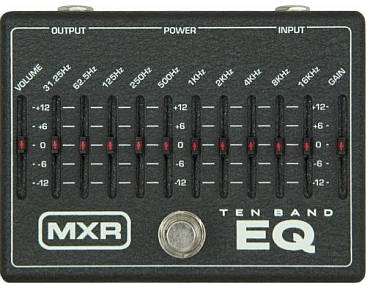 These EQ pedals can also be implemented on live vocals.

The vocal is one of the most important parts of the band practice because the singer or the lead vocalist will always be the star during the concert. However these are often ignored in most band practice setups and instead focus more on other instruments. There are two basic instruments that can drown or masked the vocals during band practice:

a.) Guitars
b.) Bass guitars

Snare drums and other drum parts are an exception because in small band practice setup; there is no need to put microphones on drums since it is already loud.

Vocal frequency range is mostly found in the mid range (middle frequencies). Supposing a setting of 1 corresponds to maximum setting on any band of the guitar amplifier EQ knob and setting of 0 to be the minimum. Then to improve vocal clarity:

b.) If you are using an EQ pedal for either bass or guitars, you can cut the following frequencies:

c.) If you have EQ control for the vocals, boost +3dB on 500Hz, 1000Hz and 2000Hz. This will drastically improve vocal clarity in the band practice.

The next problem is the bass clarity; you can cut implement the following EQ on Guitar amplifiers:

If you have EQ control for vocals, cut -6dB on 125Hz, 62.5Hz and 31.25Hz. To improve guitar distortion heaviness clarity particularly for rock bands, boost +3dB using EQ pedal on 250Hz and 4 KHz. To further improve deep bass guitar clarity, boost +3dB on 31.25Hz, 62.5Hz using an EQ pedal. Or using bass guitar amplifier EQ knob, switch the bass control to 0.75 to max. Finally, let the band play a song. Use the volume settings on all amplifiers to finally balance the volume of all instruments. Since drums will be louder, it is advisable for the drummer to be in “dynamics” and “comparable in volume” with the rest of the musical instruments for the EQ settings to work its magic during band practice.