There are lots of instances you might be recording a live band performance such as garage band taping to a live concert. In this way, you can make it as your own demo or even as a marketing tool to promote your band songs. In this tutorial, you will be presented with 4 different ways and methods on recording a live band. It depends on your available gears, recording skill and budget. OK let’s start.

Method #1: The Simplest Method- > One microphone

The crudest yet acceptable method is to use only one microphone to record the band. The best type of microphone is an omnidirectional pattern because of its ability to pickup sound waves from all directions. For example, you can use blue yeti USB microphone to record a live band set up as shown in the screenshot below: 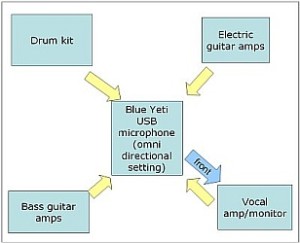 This does not however pickup the stereo image of the band since you are only using one microphone and the recording will be in mono. The recording chain can be as follows:

In the above setup, you only need DAW software (Reaper for example) and you need to configure it to accept signal from the USB microphone. Read this Reaper tutorial to get started.

However, if you want the best sound quality that you can get with a single microphone, you need the following:

a.) A high quality external audio interface. If you are using Windows and your computer has an USB port, you can get some recommendations here.

b.) Omnidirectional large diaphragm condenser microphone with flat frequency response. These are not very expensive and some microphones are affordable such as Behringer C-3. The recording chain will be:

Of course you need to watch out for clipping and all other stuff that could degrade the quality of your recording. You might want to make sure that the sound of the band is balanced; that is the drums would not drown the vocals as well as the guitar amplifier. These needs manual adjustment and discipline on the part of the musicians. In all methods discussed in this tutorial, you need to apply proper gain staging to get a quality recorded signal.

Bear in mind that the recording quality using this method (and also other methods below) strongly depends on the acoustic environment where the band would be performing. In some instances, it would be hard to get a clear definition of the band particularly that there is no way to mix the instruments after recording since they are recorded together. This method would be useful for creating a rough demo of any of your songs.