If you have your own netbook right now, you can transform it into a fully working home recording studio. This is what you need:

a.) Audio interface or small mixer – for accepting and conditioning input signals from your musical instruments.

b.) Recording software – there are free such as Audacity and there are also commercial ones like Cubase, Reaper or Adobe Audition. If you still do not have a recording software, feel free to install it first to your netbook. This tutorial will illustrate Audacity since its free and simple to use.

) to your netbook and then use that in your music production projects. Using a USB audio interface is straightforward and easy because all you need is to plug it directly to your netbook USB inputs. But on a small audio mixer, it needs to be plugged to your Netbook microphone or line-inputs. Although appears simple, it can be complicated to beginners. Let’s create a small home recording studio using the signal flow path in recording such as this: 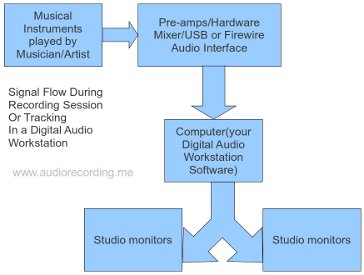 1.) Plug your netbook power adapter. It is highly recommended to plug the AC adapter to your netbook because any audio processing tasks is power intensive and will consume your battery power very quick. Power-on your netbook and boot into Windows 7 (if you are using a different OS, the steps are somewhat similar).

2.) Connect your mixer output to your netbook microphone/line-input. The mixer output is stereo and you need connnectors such as this(red and white connectors are for left and right signal of the stereo output): 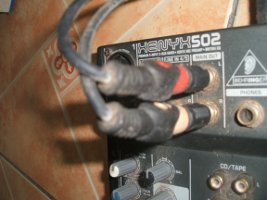 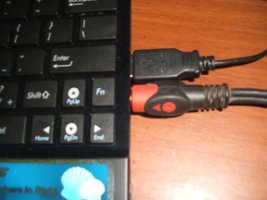 Do not yet plugged any musical instruments to your mixer.

Now that your audio hardware mixer is ready to use, do the following test to prepare your audio signals for recording:

1.) Mute any speakers or studio monitors. Plug any musical instrument to your mixer line inputs. For example, in this tutorial a nylon guitar is used. Plug it to any available line input in your mixer, such as this (enclosed in yellow box): 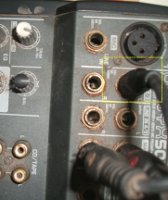 In some netbooks particularly ASUS EeePC, the microphone and headphones function as one input. So you need to configure your Windows 7 built-in audio mixer to enable microphone/line inputs. 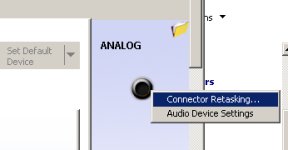