Compressors, Reverb and EQ are the most important effects in audio mixing. When used properly, they significantly improve the quality of your audio mix. This beginner tutorial will talk about how to connect them to your mixing console. This is referring to hardware mixing consoles (the one you commonly see in big studios, see picture below) and digital audio mixer inside your software (as they often mimic real world mixing console). 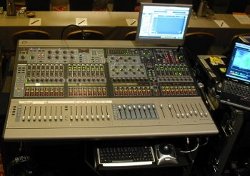 The principle of operation is basically the same except that its more flexible in software. This post assumes you have basic knowledge about pre-faders, post-faders, aux sends/return and Insert FX.

Step1: Connecting EQ and Compressor to your Mixer

EQ works by altering the frequency response of the signal. In most audio mixing practices, these two effects are used together (in tandem with one another). Some applications need you to EQ before you compress. There are also instances where you need to compress before you apply EQ. It depends on the sound you are working on.

In most cases, you should be using the “Insert FX” feature in your mixer when connecting a compressor and EQ . In DAW software, this is usually the FX you see in the mixing session.Connecting as inserts makes them in series with the signal paths. There are also instances where you will be connecting compressors in parallel, this means using aux sends and return.

A typical application is to accomplish a bit of loudness and punch to a mixed track. For example you would want to produce a powerful snare drum sound. So you might want to connect the compressor in parallel and then send the “wet” or “compressed” signal to mixed with the dry signal. The result is a big sound. This is not only used in snare drum tracks but to any audio tracks in the mix.

If you are using Reaper DAW, you can read this tutorial on Reaper aux send to learn how to set up parallel compression in your mix.

In hardware mixing consoles; supposing you would want to compress first then EQ. You will need to use one Insert cable which basically consist of one TRS jack (see below) and two jacks (ring and tip). You also need one unbalanced or balanced cable(recommended if your compressor/EQ has balanced connectors) for connecting compressors and EQ together. An insert cable looks like this: 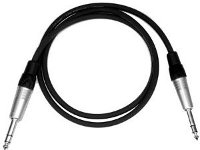 Unbalanced cables are common causes of noise in recordings. So it’s recommended if possible always use balance cable when making connections with your hardware. To do this; simply plug the TRS jack of the insert cable to your mixer insert.

Then the tip jack of the TRS cable to the compressor input. Since you connect them in series, connect the compressor output to EQ input using a balance cable.Then connect the insert cable ring jack (the red colored jack) to the EQ output. So basically the resulting signal path goes like this: (Compression before EQ example) 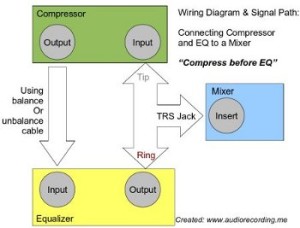 Connecting Compressor and EQ to Mixer 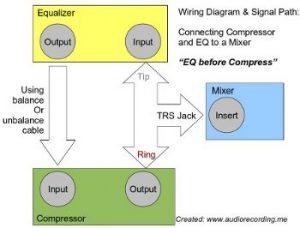 EQ before you compress

Take note that in an insert cable, the red jack is the ring and the white/gray is the tip.

Step2: How to connect a reverb unit to your Mixer

Reverb unit is commonly connected in Aux sends/return in your mixer. The main question is whether to add it post fader or pre-fader.

For most reverb mixing applications, you should do it post-fader since you can maintain the same dry/wet ratio even if you adjust the fader. Why?

Consider the signal path as follows in post-fader applications:

For example you set the reverb to 40% wet, 60% dry ratio. If you increase the fader level, this will increase dry input signal to the reverb unit but the amount of wet signal would also increase to maintain the ratio.

However you can also do it pre-fader for some creative reverb applications, try to experiment.Now for the connection diagram in a mixing console hardware; see the screenshot below: 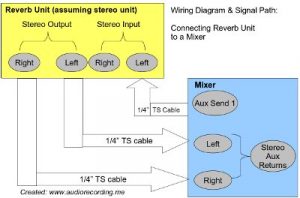 How to connect reverb to mixer

If your mixer has aux send 1 and aux send 2, you will be needing only one. For example you use aux send 1 only. Connect ¼ TS cable from aux send output of the mixer to either of the reverb unit stereo inputs (for example the left channel). Now use two ¼ TS cables to connect the reverb stereo outputs to your mixer stereo aux returns.

For audio mixing software, the concept is similar. If you are using Reaper, you can read this tutorial on Reaper aux send to add a reverb plugin to your mix.

Adding reverb on aux sends and return is adding effects on parallel. Adding EQ and compressors in series with the signal path is inserting FX on your mix. Always remember this rule.

1.) When connecting microphones, always connect them to the balanced input of the mixer. This will give the best signal as possible because of the absence of noise. If you have a microphone make sure it does have a balanced XLR male output and connect it to the mixer XLR female input. See diagram: 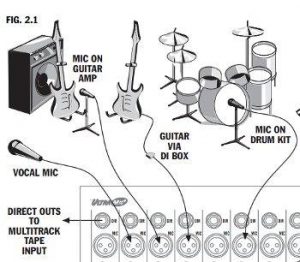