By default, if you have an on-board sound card or PCI soundcard installed; it would be very easy to get that working in Linux. As long as you have correctly installed the hardware on your motherboard, Linux would take care of the audio drivers itself and it would run without any hassle after installation. These drivers can be using ALSA and they are included with your distribution packages by default.

But things are very different if you are using an external Firewire audio interface. Typically, these are professional audio recording interface that are often used in music production. To get this to work; there are some things to be done so that you can use your audio interface as a default sound device. Default sound device would mean you can use it in all of your PC audio tasks. This includes the following:

This tutorial is written using Ubuntu 11.10 distribution in Linux but would also apply in other distributions such as Linux Mint.

Step1: Configure your Firewire Audio Interface to work in Recording

Since your external Firewire audio interface is primarily used for recording, the first step is configuring it to work with recording. The objectives of this step are the following:

Unlike in Windows where the manufacturer supplies the drivers; in Linux there is only generic Firewire audio driver called as FFADO. These drivers are designed to work with many Firewire audio interfaces. You can find out if your hardware is supported here.

Do not proceed to step two until your Firewire audio is fully working and attained the objectives set previously.

In Step1, your Firewire audio interface communicates with JACK daemon. However, by default, you cannot use JACK to accomplish the rest of the audio task below without additional configuration.

a.) Listen to MP3 using your favorite multimedia player.
b.) Watching movies.
c.) Use audio along with your browser.

Outside the JACK world, there is ALSA; an audio driver designed for general consumer and multimedia applications. These are the ones used by your multimedia MP3 players, movie streamers, browsers, etc. except for serious music production/recording where JACK is used.

Below are the detailed steps on how to do this:

You need this installed. Once it is properly installed you see a green marked below the plug-in, see screenshot below:

2.) Open up your terminal by pressing Control – Alt – T. Type this command (take note of the dot before asoundrc):

Assuming its empty, copy the code from here to the .asoundrc file. This is how it looks like after copying the code: 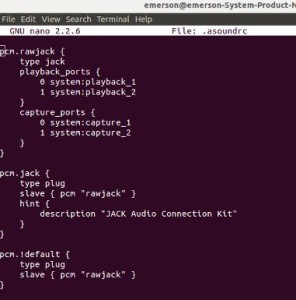 To save, click Control- O, and then type Control X to exit.