How to use reference tracks when mastering using LinMB compressor

Once you finally decided and completed on applying dynamics and EQ adjustments, you can optionally apply a low pass filter at 16.5 KHz. Most commercial CD seems to implement this approach. Try opening a commercial/professional mastered audio track. Then plot the frequency analysis of the entire audio; you will notice that above 16 KHz are substantially filtered. Screenshot (inside the white box): 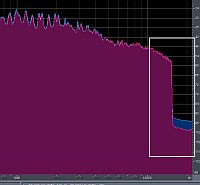 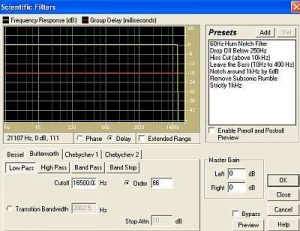 This is the time to use a limiter to maximize the volume of the audio material. Personally I use Waves L1 Ultramaximizer plug-in in Adobe Audition, with the following settings:

In Adobe Audition, you can get the average RMS power of the audio by going to Analyze – Statistics. Get the data before mastering. I personally aimed for -14dB RMS power as the target average. This is safe without squashing the resulting dynamics. You can decide whether you like to be lower or even higher, it depends on the material. Supposing the current average RMS power is -19dB, the threshold that I will be going to apply: Threshold = -14dB – (-19dB) = 5dB. This is the final L1 settings: 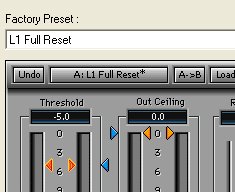 After limiting, optionally you can apply just a small reverb to sparkle if the audio is very dry. Applying reverb depends also on the material. Sample rate conversion can now be implemented to convert the sampling rate to 44.1 KHz. Dithering is implemented after SRC. Its job is to convert the bit depth down to 16 bits. Essentially, the purpose of SRC and dithering is to convert 24 bit/96Khz to 16 bit/44.1Khz audio which is the format for audio CD. You can read this tutorial on how to use dithering and sample rate conversion during mastering. After converting the mastered audio to a distribution format (16 bit/44.1Khz); it can be distributed in two ways:

a.) Physical album distribution using audio CD – you need to create a CD master that conforms to red book standard. You should as well use the best CD burner for creating Redbook CD in preparation to replication.
b.) Digital album distribution using MP3– you can use quality MP3 encoders such as LAME to create your MP3 tracks. You can read this tutorial on how to add lame mp3 encoder to Adobe Audition.