This introductory tutorial will help the beginner in audio mastering to quickly grasp the concepts and learn audio mastering using common tools such as multi-band compressors. Quality studio monitoring is still very important here, so make sure you are working with near field monitors. I received a request from a reader of this blog regarding this topic and requesting to master his music:

“You have a very cool website here! To see someone who values education as highly as you do is great. That aside, I would like to ask for your advice. I’m in a band that just received a recording of a live show we played. It’s just a stereo recording done with two condenser room mics and recorded to a DAT machine / cd writer.

Our intended purpose for these recordings is to put up on Myspace and to give out as free promotional material until we make a multitrack record. We did encounter a problem though, while reviewing the cd, the level of the recording is far too quiet, and once I just tried to make it louder I noticed though it is a very clear recording it could use some mastering in order for it to sound polished…

I have no idea where to start in doing this.

Think you could help by offering any suggestions on how i could clean up the recording? I could maybe send the WAV files to you if you’d like to listen. I also have Adobe Audition and ProTools M-Powered for audio editing capabilities.

The recording is nice and clean. The mix is also well-done with only slight adjustments to be made. This is the original mix down in 192kbps MP3 version:

This is the waveform before mastering:

The following are my immediate observations:

1.) The mix down is originally provided at 44.1 KHz and 16-bit WAV. Ideally in mastering you should be working at a much higher bit rates. So the first step is to convert it to 24bit/96Khz. The primary reason is to minimize the artifacts caused by the mastering effects.

2.) The raw mix has some strong bass frequency response.
3.) The “presence” is lacking. The vocals are not prominent, it is somewhat buried in the mix.
4.) The high frequency response is OK but still need a bit of cutting.
5.) The average SPL of the raw mix down is around -26.79 dB, so it’s indeed quiet.

Step1.) I up sampled the raw mix from 16-bit/44.1Khz to 24 bit/96Khz for reason stated previously. Most audio mastering software has this feature. However if the mix is already in 24 bit/96Khz, then there is no need to up sample. 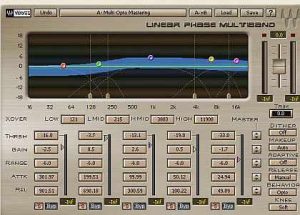