This is an introductory tutorial for beginners in digital audio waveform. This will give you the most important information necessary when working with digital audio regardless of what DAW (digital audio workstation) you are using and the type of projects you are doing. The digital audio waveform is an object that can be described by a lot of properties. As an audio engineer, you will be manipulating these properties in your project to get the sound you need. To manipulate these properties, you will be using a lot of tools such as compressor, parametric equalizer, sample rate converter etc. Let’s start, see an example waveform below: 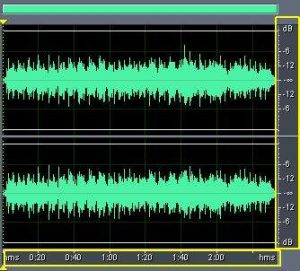 In most recording software, the default waveform is using amplitude vs. time representation of digital audio (also called the “time domain” representation). Take note the x and y-axis of the waveform (inside the yellow box). The following are the major visible waveform properties:

2.) Amplitude – shown in the y-axis is the amplitude property of the waveform. Amplitude in digital audio is scaled in dBFS (logarithmic scale) which tells the loudness or the volume of the waveform at given time. dBFS means decibel “relative to full scale”. In digital audio, the maximum digital audio level is 0dBFS. Beyond this level, you increase the risk of clipping and distortion in your digital audio signal which will result to undesirable effects in audio quality. The y-axis is scaled from 0dBFS (maximum possible level) all the way down to negative infinity dB (flat line) which signifies complete audio silence. So this implies that -3dBFS is louder than -12dBFS or -12dBFS is louder than -36dBFS. Farther the value of the decibel below 0 dBFS; the lesser will be its resulting loudness.

3.) Number of channels – In the above screenshot, you see two waveforms in the time domain which means there are two channels in the waveform. Two channels mean it is a “stereo” audio waveform. In some waveforms, you can only see one waveform, and it is called a “mono” audio waveform. This is the most commonly used format in recording/tracking (e.g. guitars, vocals, drums, etc.). During audio mixing, you will be summing all mono tracks into a single stereo waveform for mastering. Also in multichannel projects, you will have more than 2 channels and it is called “surround” audio.

There are also non-visible digital audio waveform properties that are important. To know these properties, you need a tool that can provide the statistics of the waveform. This is usually available in most standard recording software. For example in Adobe Audition 1.5, you can get the waveform statistics by selecting the entire waveform first (pressing Control – A) then go to Analyze – Statistics. Below are the properties:

other properties of the digital audio