In the 90’s, it was the birth of DAW (Digital audio workstation). Digital recording was starting to become popular in the trendy studios. However, it was still a mixture of digital and analog technologies. It is possible for the entire track to be recorded in analog (using 80’s technology) but mixed in digital using digital audio mixing software. Some engineers are also implementing digital recording and then export the tracks to analog for further processing. Things were very expensive before (70’s, 80’s and early 90’s); all the recording technologies were almost inaccessible to a common musician. As a result, most recording projects are done in professional studios using the described setup for both indie and major label artists.

The following is the signal path:

Take a look at the frequency response graph below: 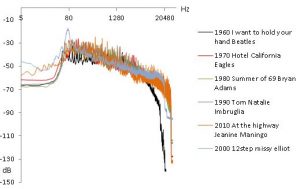 The raw data was created using Adobe Audition frequency analysis feature with the highest FFT sample settings of 65536. All songs are normalized to a comparable volume. Then the data are exported to Excel spread sheet for plotting. It shows the frequency vs. amplitude, a useful way how to describe how the recording methods discussed previously are affecting the resulting frequency response of the produced songs.

For example in 1960’s, the Beatle hits have lower recording fidelity (look at the high-end frequencies) compared to songs produced with other methods. The recording method mostly affects the bass and treble response of the music. The 1970’s, 80’s and 90’s songs are created using analog multi-track recorder and they have comparable bass and treble response. If you are working with analog recorders, you will learn that the tape speed, etc can influence the resulting frequency response.

In year 2000+, music projects produced using digital audio workstation have louder bass response compared to previous decades though the mid frequency and treble response are comparable. Digital recording at higher bit depth (e.g. 24-bit or 32-bits) increases the sound fidelity of the artist performance. One of my produced tracks “At the highway” was recorded, mixed and mastered entirely using digital methods in my budget home studio. You can listen to it under “My Works”.