The loudness war is not yet over. “Loudness war” is defined by an increasing average RMS power (or simply “volume”) of released recordings per decade. This comes from the fact that recording labels starting in the 90’s came to appreciate the importance of loudness in their released recordings because of the following reasons:

a.) Being loud catches attention. If certain music is loud enough, it can stand out from the rest of the music tracks being played.

b.) Loudness correlates quality and professionalism. It is because only commercial mastering studios (at that time) would be able to maximize the volume of the track as loud as possible.

Those things are good, but engaging in a war of loudness is not beneficial in the long run. Too much loudness can ruin the dynamics of the recording. At worse, distortions can appear at loud volumes and it is not pleasant to listen. You might notice that it would be very tiring to listen to a very loud CD because of the absence of dynamics. So how much average volume is enough? Below are some examples of how the loudness war evolves with some actual examination of commercially released tracks:

Livin on a prayer sound wave

Livin on a prayer average volume

As what you can see, the track averages around -19dB and there is still a lot of headroom space remaining. So this means that if you turn the volume up, it won’t get distorted and dynamics are well preserved. In general, it gives plenty of room to adjust and provides a nice listening experience. OK, let’s examine a sample track coming from the early 90’s:

Track Title: “Come as you are”
Date released: 1992
Performed by: Nirvana 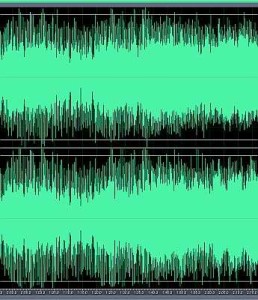 come as you are sound wave

come as you are volume

You might notice that the average volume is now louder compared in the 80’s. It averages around -16dB. Also the headroom is getting smaller so as the difference between loud and soft; nevertheless it still very nice to listen even if you turn the volume up. Next let’s examine how the loudness war progresses towards the end of the 90’s: