Explanation of the above EQ settings:

The kick drum spikes are aimed to be at 80Hz and the bass guitar is centered at 200Hz. The result of this mix is that the kick drum appears strong in the sub-bass while the bass guitar notes is still providing the necessary groove in the mix (bass notes clearly audible even in smaller speakers due to the boost at 200Hz).

In jazz music, the sound of kick drum and bass guitar combination is different compared to pop, rock and country music.

For example, it is normal for the jazz music to have a complete absence of sub-bass guitar frequencies as jazz bassist and drummer tends to be an instrumentalist/soloist so they would always be playing solo/emphasized notes all the time (instead of playing in common time/rhythm aspect). And the main objective of the kick drum audio mixing process is to give clarity to these two instruments.

Heaviness is not important in jazz so the low end can be completely reduced to give way to ambiance and clarity of the sound. You can start with:

As you have observed, the kick drum spikes would sound like a “thump” instead of having a boom/deep sound common in rock and pop music. The boost of +3dB can be changed to +4dB or so on (let +6dB be the maximum), until you can hear a clearly defined kick sound.

If you want to know the EQ settings guide for all of your instruments in the mix at one glance, you can refer to this tutorial: Complete EQ settings to Start when doing Audio Mixing.

Personally in my own music production projects, I do not compress kick drums often in the mix because compressing it can reduce its power during the mastering stage. However if you need to compress kick drums, below are the suggestions:

This is an example screenshot of the compressor (Waves C1 Comp mono) illustrating a typical kick drum compressor settings (for fat kick sound): 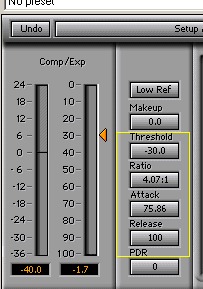 Below are some important related tutorials relating to compression:

a.) Snare Compression- How the Drum Sound Changes with Different Settings – see how a snare drum sound changes with compression. You can apply the same concept with kick drums.

b.) How Compressor Attack and Release Works? – attack and release times are one of the most important parameters in compression that can have a significant impact on the kick drum sound