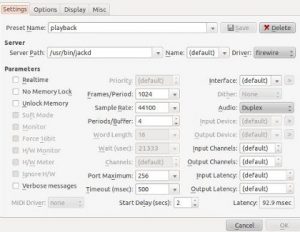 If you encounter problems with playback (annoying pops, clicks, etc.), you can either:
a.) Change the sample rate from 44100 to 48000.
b.) Slowly increase the frames/period or periods/buffer until the playback is OK.

Now everything has been set, turn on your audio interface (make sure studio monitors are connected also) and reboot your PC. Follow the testing procedures below:

d.) In the second terminal, run the ffado mixer:

Make sure the playback preset is ready. Hit start, you should not see any XRUNS. See screenshot below:

d.) In the fourth terminal, run this command to play the test wav file in your desktop:

Replace the parameters above with your Ubuntu username and the name of the test wav file. When you run the command, there should be sound coming out of your monitors. If it plays the audio wav file, you have correctly enabled your Firewire audio interface to work with ALSA applications. If there is no sound, there should be an error. You might need to install alsa-utils from the Ubuntu software center.

Proceed to Step5 if it’s working.

The most recommended audio and video player would be Gnome Mplayer. Although not perfectly stable; it is found out to work with ALSA to JACK implementation. Simply install it from Ubuntu software center.

Once installed, launch Gnome MPlayer and go to Edit – Preferences. You need to configure the player to output via ALSA and in stereo. See screenshot below:

As a summary; to play MP3 or movies with Gnome MPlayer and using your Firewire audio interface: