Tip: Do not aim microphones at each other as this will introduce phase cancellation and maybe that would explain why you are not getting clear enough signal.

Step4.) Connect each microphone to one input jack (mono) in the line input in the mixer. All in all you will be using 4 line input jacks on your mixer. See the screenshot below on how you connect the drum microphones to a sample small mixer (shown is Behringer Xenyx 502, but similar features are available in other mixer)):

IMPORTANT: Bear in mind that if you are using microphones with XLR output ,you will be needing a mixer with 4 XLR inputs as well. In this case, you cannot use Xenyx 502 such as the example;that mixer is only used as an illustration. 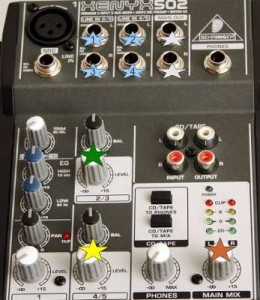 The 4 blue stars are the line inputs where you will need to place the microphone inputs from the drums.

Step5.) Connect your mixer to your computer (either using a sound card or an audio interface will do). To connect to your computer sound card, use both left and right on the main out as shown in the above screenshot (gray star). You might be needing a connector/converter to RCA if the interface/soundcard inputs requires RCA.

Step6.) Check if you are getting the proper recording level. In Adobe audition, you can check it by going to options then “Monitor Record levels” in multitrack. Try hitting the snare or any parts of the drum, the volume meter on Adobe audition should spike high but not too near 0 as it can cause clipping. Make sure you are not recording clipped signals. Try hitting as loud as you can and make sure it did not register a red (clipped) level on volume meter.

The following are the adjustments you can do :

a.) If the recorded sound is weak, try to increase the line input volume on the mixer shown in green and yellow stars above.
b.) If the sound is still not clear enough, try to increase the “trim” settings a little. This will act as the gain.
c.) Try also adjusting the main mix volume (in orange star).
d.) Finally the volume of your audio interface or sound card.

Try to avoid noise as you increase gain or volume. Do a lot of sound checking covering all your drum parts. Finally recording this type of setup will bounce your entire drum recording into a single stereo track in Adobe Audition. A single stereo track means one left signal and one right signal which is coming from the main output shown in the above screenshot.