I received an inquiry from Ivan relating to “phase cancellation” problem in audio recording:

From Ivan:
Can you please explain what is a “phase cancellation” problem?
I think I have this problem in a song. When I check my mix in mono, my guitar tracks (left and right) disappear. Is this phase cancellation ?
If so, how can I fix that?
Thanks

Phase cancellation is a serious issue in recording/mixing/mastering. Your problem is indeed phased cancellation. It is because your left and right guitars are “out of phase” with each other (like 180 degrees). You will NOT notice this problem when played in stereo but the problem will seriously affects when your audio signal is converted to mono.

An out of phase can be best explained graphically, supposing you have a stereo sound wave below: 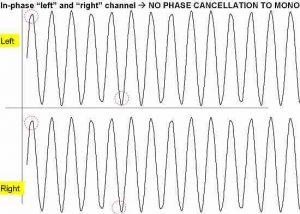 If you convert a stereo to mono, the left and right channels are “sum up”, so if they are in-phrase you can basically sum their amplitudes and there is no cancellation due to mismatch.

Example = + 2dB (left channel) + (+2dB right channel) ~ 4dB summation, so there is no weakening of audio results. A “+” symbol indicates the phase. Since both right and left channel are positive, then they are in-phase with each other such as shown in the above screenshot.

What will happen if the left and right channels of the stereo are “out of phase”? See screenshot below: 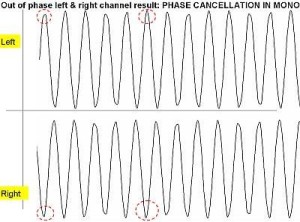 out of phase audio sound wave