A question from a reader on this blog: “I have recorded live drum using a 4 channel mixer and 4 mics via adobe audition 3.. but the sound is not clear enough… im new to this so plz help me out…..”

OK, since it looks like you have the correct set of gears and equipments I assume that the problem is on the “technicalities” on how to record drums using 4 microphones. To resolve this aissue you need to learn how to properly track drums in a recording session. The following are the standard steps in tracking drums:

Step1.) You need to setup the drums properly. Make sure that the drums are tuned (for example snare and kick) and ensure that all microphones are fully working as well as the cables. If you have the drummer in the studio, let him play it and adjust so that it will have an optimal tone. Bear in mind that the room and acoustics in your studio can play a great role on the resulting sound of the drums. Of course, if the drummer is not hitting enough then the captured recording will be weak. This does not mean that the drummer should be overly aggressive as this can damage the drum in the long run. The key is to adjust the mixer settings and the recording level so that it will have a well recorded sound.

Step2.) You should have the proper microphones (recommended mics are below):

Step3.) Position the four microphones as shown in the screenshot below (microphones are shown inside white circles): 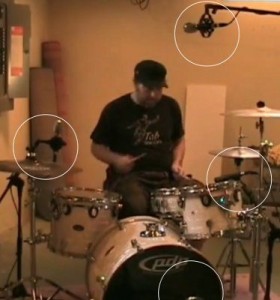 You can experiment based on the initial settings and see what are the best results. Some short tips:
Snare: Put some 2 inches allowance from SM57 from edge of the snare at 45 degrees angle.
Kick drum: A good tip is to place the microphone inside the kick drum by removing the drum head, then put some blanket over it.
Overhead 1 -(near tom) – start positioning at 3 to 6 inches. experiment for best sound.
Overhead 2 -should be at the center of the drums between left and right cymbals pointing downward, tweak this for best sound.