As you can see, REAPER track #1 is set to record in mono and will receive input from the audio interface analog input #1. For other REAPER tracks for recording, make sure to set them to mono and configure proper analog inputs that they are going to use. This is another example guide illustrating when to record in stereo or mono like in vocals.

4.) Connect your musical instrument to your audio interface. This can be a microphone, guitar, etc. Observe the following golden rules of connecting instruments for recording:

a.) Connect microphones to microphone preamp input for your audio interface.
b.) Use balanced inputs and outputs (refer to your hardware specifications for details). (read more details here)

5.) Aim the track for recording by clicking the record button (see inside the red box):

If you mouse over the button after clicking on it; you should see the message “Record Armed” and this implies that the track is now ready to accept recording from your audio interface input 1.

6.) Play the loudest section to be recorded with your musical instrument and stop. Take note of the captured recording levels received by REAPER. You should make sure that the loudest part of the recording is less than -6dB. This will minimize the occurrence of distortion and clipping. See screenshot below:

For example in the above screenshot, the maximum peak levels captured is around -8dB which is OK. If it hits beyond -6dB; lower the preamp gain settings in your audio interface. Repeat the test until the maximum peak recording levels should fall below -6dB. On the average, you should aim at the recording level of -18dB for most of the time.

7.) Ensure that you are recording at 24-bits. To do this, review your project settings shown at the top right menu. You should see 24-bits. For example see below:

The main objective of doing step 6 and 7 is for correct gain staging.

8.) Assign a track name. For example, see below:

Assigning a track name in Reaper

Note: If you added multiple tracks at once in Step1. It will automatically name your tracks based on numbers. For example, if you want to record multiple guitar tracks, it will be named automatically as guitar1, guitar2, etc. when you assign a common name “guitars”. In the above example; the track name assigned is “acoustic guitar recording”.

9.) When everything is set and ready, hit the record button:

The captured waveforms would then appear on the track under recording (inside the yellow box).

10.) When the recording is done or you would like to stop the recording, hit the stop button. You will then see the options below: 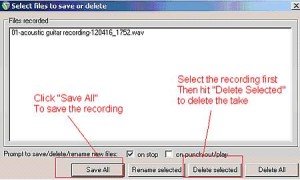 To save the recorded track, hit “Save all” and it will be saved in this path by default: C:Documents and SettingsYour Windows UsernameMy DocumentsREAPER Media. To remove the recorded track because it’s not a perfect take or you would like to repeat the take, select the track first (highlighting it) then hit “Delete selected”.

11.) You can then listen to the recorded take by hitting the playback button in REAPER.

12.) At the end of the recording session, do not forget to save the project by going to File – Save Project.

Recording One at a Time

This is easy. The only difference is that you would only be plugging one instrument at a time to your audio interface and you would only be creating/recording one track in your DAW/Recording software.
Some important reminder:

1.) Always watch the level meters on other channels, turn the gain to minimum or mute if you are not using them.

Below are the fundamental steps to do multi-track recording sessions:

1. Start recording the drums. Make it right the first time. Be sure to complete all the drum recordings before proceeding to the next step. Drums provide the basis of rhythm foundation for the rest of the tracks. You should be spending an ample amount of time in tracking drums. A drum recording mistake detected in the succeeding process would now be very difficult to correct. It is because if timing/BPM would be changed, everything would be re-recorded to keep in time with the drum beats.

Drummers need some reference and some ways to isolate the drum sound from the rest of the band. It is highly important to control sound bleeding otherwise you would be capturing the sound from other instruments.

2. Start recording the guitars. Guitar recording needs creativity and time. On the tips to prevent sound bleeding, there are suggestions included on how to isolate the guitar sound from the rest of the band.

Guitars are usually recorded one at a time, carefully assigning tracks on your DAW software and making sure it is properly labelled to avoid confusion (e.g. leadguitar1, leadguitar2, rhythmguitar1, etc.)

You can refer to the following tutorials below for recording guitars:

a.) How to record overdrive or distortion guitars using an amp.
b.) This is another tutorial illustrating how to record guitar using DI or amplifier cabinet method with clean techniques.

3. Record the bass. Bass guitar recordings can be done in DI or amp. For details, you can refer to this user guide.

4. Pre-Panning stage- this is the stage after recording all tracks except the vocals. Panning is about assigning the tracks location in the stereo field. Since this is pre-panning, these are not yet the final panning settings that would be used in the mixing stage. This is only temporarily used for recording the vocals (so that the vocalist would have a clearer idea of the background/instrumental music, making it more lively and natural sounding). You do not need to apply other effects like EQ and compression, leave that to the audio mixing engineer. To get started, you can read the following tutorials:

a.) A tutorial on panning drum instruments.
b.) This article illustrates some techniques on how to create realistic panning in your mixes.

5. Vocal recording stage: This is the last stage of the multi-track recording process. This is where the lead and background vocals would be recorded over the pre-panned background instrumental. For more details on this topic click here.

7. Reset all panning settings and all temporary effects. All recordings to be sent for audio mixing should be as original as possible as the recording itself (no alteration to be made on the sound recording by your DAW).

8. You can now start the audio mixing process.