Panning is how the instruments are arranged within the stereo image. By properly using this mixing feature, you can create a very realistic mix. Mixing engineer should mix tracks with a live sound stage/concert stage perspective. A vocal is always in the center because the band lead singer is the star of the show. At the back of the vocals is the bass player. Typically at the back of the bass player is the drummer. The band’s guitarists are on the left and the right. Bear in mind that different panning arrangement are possible for additional instruments (such a band with piano or others). But this concept illustrates the basic things on how to do panning in audio mixing to create a very realistic stereo image such as the diagram shown below: 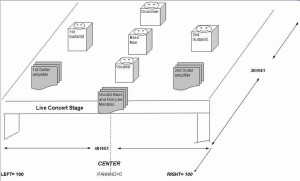 Location of instruments in stereo field

To check how realistic is this conversion, we will use the width of the real drum set.
Real drum set needs 5 feet width space when fully set-up. Converting 5 feet to panning units in recording software is about :

This means that for a 40 feet sound stage, to create a real stereo image of drums, it should be panned between -12.5 to 12.5 (this is the correct specification).

Guitarist are placed +75 to -75 respectively. This means they are both located :

One important thing to take note on panning is the energy level with respect to panning distance. Rule of thumb is that, the lowest frequencies should be pan on the center except for the vocals. And the higher the frequencies, the farther you can place them away from the center. It is because, low frequencies such as bass occupies massive energies and needs to placed at the center for maximum volume.

The following are advantages of proper panning in mixing :
a. Create a real stereo image of an actual live sound stage.
b. Avoid battling the same frequencies in the same location of the stereo image.

For details about panning settings for different musical instruments, you can refer to the following tutorials: