There are some advanced EQ parametric such as Waves LinEQ and L2 Ultramaximizer that you can use to make your masters sound loud and big by making big EQ adjustments without compromising the audio quality. Always remember to use your ear and compare your mastering to the standard produced records of the same genre (if you are mastering rock music, you can listen to rock records and compare whether it is comparable sonic quality or not).

For more information about implementing EQ in mastering, I suggest you will check out the following tutorials:

1.) 54 New Year Resolutions to Improve Recording Quality of your Projects– go directly to the mastering section for the tips.
2.) Using Parametric EQ to Find the “Sweet Spot” of any Musical Instruments – in mastering, using parametric EQ is indispensable. Make sure you know how to detect EQ issues by knowing the “sweet spot” of the problem.
3.) Finding Instrument frequencies using Notch filtering in Audio Mastering – this is another detect of finding out serious EQ issues in mastering – using notch filtering.

Differences between EQ and Compression in Mixing and Mastering

A reader asked me about the differences between EQ and Compression in mixing and audio mastering process. Here it is:

Hi Emerson. Thanks for all your tips. They are all very useful. I have a confusion.In some tutorials you give advises on compression and parametric EQ settings for a variety of instruments, however, in the tutorial called, “Mastering with Cool Edit Pro / Adobe Audition” it says the following:

“No EQ and Compression is still applied. It should be completely fresh, the single waveform is still NOT being adjusted with any mastering EQ and compression settings.”

So, the final waveform shouldn’t be compressed in the initial steps of the mastering stage, however each of the instruments should be Equalized and Compressed with their particular settings during the mixing stage and you equalize and compress the final waveform? Am I getting it right?

Another question I have is, how to reduce the peak amplitude of a waveform in cool edit. I am using Normalize with -1db setting. Is that OK?

Thanks for writing to www.audiorecording.me! I think you are mistaken. Compression and EQ are applied to each instruments/tracks while mixing. And its different in mastering (explained later). But after mixdown, the resulting wave (also called “mixdown”) is NOT anymore compressed or EQ by the mixing engineer. Some mixing engineers attempt to compress this or apply limiter to impress their clients that their mix is very loud but this is not a correct practice.

It is because the compression and EQ are delicate adjustments which can strongly alter the final results of the master. In this case it should be handled by a professional mastering engineer to make this right. In mastering process, the engineer will apply another rounds of compression and EQ to the mixdown wave.This compression can either be in the form of multi-band compression and the EQ will be using either parametric equalization or shelving filters. This time the mastering engineer will only be dealing with a single audio waveform which is the mixdown. EQ and compression are applied in mastering to finally shaped the audio to its desired tonal qualities and to make it sound broadcast ready. In most cases, this is applied in the initial/early steps of mastering process.

To resolve this confusion take a look at the process flow below illustrating the compression and EQ application differences between mastering and mixing (take note that the mixing process is simplified for illustration purposes only, in reality there are other effects applied aside from compression and EQ): 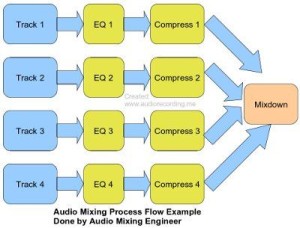 Regarding your second question:

Another question I have is, how to reduce the peak amplitude of a waveform in cool edit. I am using Normalize with -1db setting. Is that ok?

No you should not be using normalization in this case. It is because your aim is only to reduce the peak amplitude, “amplify” or “amplification” feature is enough. Normalization and amplification are actually different although they operate similarly. Normalization aims to “normalize” the wave to a specified dB and adjust DC bias/offset. Amplification does not do any DC bias offset but it can only be boosting or reduction in gain. I will be writing a separate tutorial to properly illustrate the differences between these two.

Anyway, you can always use the amplify feature with negative gain for attenuation(reduction of peak amplitude). In this case, the volume of the wave will be reduced by this fixed amount. In Audacity, amplification feature will even provide a new peak amplitude such as in this case:

The same concept can be applied to Cool Edit, apply a negative gain on amplification in dB and then a new peak amplitude will be provided(of course it is reduced from its original amount).