The answer is no. 32-bit recording is 32-bits fixed point (not using float system) while a 32-bit float has a 24-bit resolution with additional 8 bits for headroom/dynamic range. For example Sony Sound forge differentiates these two clearly when you are creating a new recording project (File – New); see screenshot: 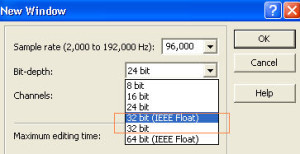 2.) Is 32-bit float in recording software is essentially the same as 24-bit recording?

Yes. For example in Adobe Audition, you cannot directly set a 24-bit depth recording. Instead they have a 32-bit float. After converting analog to digital data using your audio interface (for example sound card); Adobe Audition will be storing these recordings in 32-bit float format in your computer hard disk drive but the resolution is still 24-bits. To get the most quality out of your recordings, set your audio interface to record at the highest supported bit depth (which should be 24-bits and NOT 16-bit). As of this time, 32-bit sound cards are not commercially available; however most decent sound cards and audio interfaces now support 24-bit depth resolution during recording.

In the ADC (Analog to digital converter), the analog audio is sampled at 24-bits (if configured at this bit depth). The output of the ADC is then feed to Adobe Audition (or other recording software if configured to record at 32-bit float) which will be storing digital information in 32-bit float format instead of pure 24-bits. You can visualize it as follows:

What is a 32-bit floating system and how it works?

It consists of a sign (which tells whether the value is negative or positive); an 8-bit exponent and a 23-bit mantissa. During digital audio processing (effect plug-ins, etc); the recording/mixing software will do intensive and complex numerical calculations internally. With 32-bit float, the result of calculations during effect processing will not result to truncations or rounding errors of digital data because complex results can be represented by the 32-bit floating binary. It is the reason why most digital audio workstation software works internally at 32-bit float to get the best quality out of effects processing and mixing. To understand the conversion process between 32-bit float to decimal, download this 32 bit float to decimal Excel calculator.

Converting 32-bit float binary to decimal is using this formula: