It is shown that the kick drum channel is clipped as the level meters discovered a portion of the input signal hitting +1.3dB (above the 0dB limit). However, you might noticed that the master channel (on your far right) is not clipped at all. When you are mixing tracks that are clipped, it results to distortion and degradation of the overall audio quality. It will worsen with more effects applied and this degradation to quality will never corrected even in the mastering stage. Take note that you cannot correct a clipped signal but simply de-amplifying it (say apply -3dB amplification). It should be re-recorded. It is why it is so important to never clipped any of your recordings during tracking.

How you can Prevent Digital Clipping during Recording/Tracking?

This needs a bit of experiment and preparation on the part of the recording engineers and the musician involved. Supposing you have a recording set-up as follows: 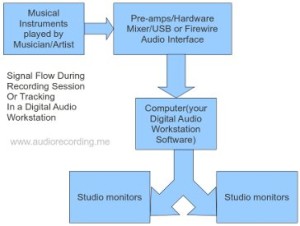 Any volume control to prevent clipping should be done outside your computer, either in mixer or USB audio interface (whatever you are using). The goal is to prevent the “clipped” signal in entering your digital audio workstation software. Below are some guidelines you can implement:

Step1.) Let the musician play the entire tracks “naturally” from start to finish. Do not tell the musician to slow the volume down or hit those strings slowly to prevent clipping because its not your job. Your job as the engineer is to make sure that recordings are not clipped digitally regardless of the musician performance. Some musicians particularly drummers and bassist tends to hit their instruments really hard in some parts of the song (particularly in the chorus section). If left unchecked, this will cause some spikes on the recordings that results to clipping. While the musician is playing his/her instruments, watch for the level meters very carefully and make sure that the loudest peaks hits around -6dB maximum. This will give more headroom for any dynamic adjustments during mixing.

Step3.) Re-test until the volume settings are OK. Record the session at 24-bit/96Khz mono (recommended). After any recording, there should be no clippings even if the musician is hitting the instruments really hard.

Step4.) While all the tracks are NOT clipped, there comes a time when the master channel starts to become red (after a number of tracks has been added), it is because the summation of all volumes from all tracks (which are not clipped anyway) are now becoming loud. To correct this issue, kindly lower down the master channel fader to around -6dB maximum before formally starting the mixing session. You can adjust that later. As a summary:

a.) A clipped signal on master channel needs only adjustment on the master channel fader (lower it down) provided no clipping occurs in the each channel.
b.) But if clipping on a single channel (representing a specific instrument) occurs, it needs to be re-recorded by the following the steps outlined above.