To EQ conga, it must be based on its frequency characteristics. The simplest method is to give some boost on its fundamental frequencies to make them sound more prominent in the mix. These are example settings (set using Waves Q3 Paragraphic EQ): 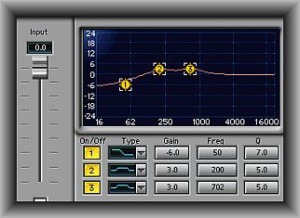 If you have vocals in your mix that is played along with conga, I would consider cutting at 2000Hz -6dB provided the vocals are also boosted at this frequency (2 KHz).

Compressing Conga in the Mix

EQ is the first of the series of effects in the Conga FX chain, the next one is the compressor and the last one is the reverb (more details later). 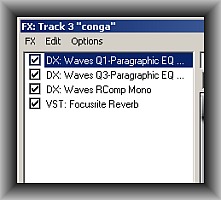 Compression settings for conga vary with the material. If you want more dynamics from your conga music, then you need to apply less or no compression.

In this example, it uses the Waves Rcomp compressor to even out the conga volume. To properly set the compressor settings for Conga, the first thing you need to set is the threshold. Solo conga track in your DAW and watch out for the maximum peak. For example, in the screenshot below the maximum peak is -18dB. 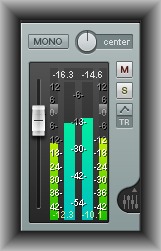 The threshold can be set lower than -18dB so that the compressor should be working all the time to even out the volume. In this example a threshold of -20dB has been used.

The attack time of conga should be to very fast like 1ms because conga by nature has a very sharp transient sound (much like a snare). Setting this at 1ms, assures that the compressor is working immediately for those fast transients.

Release time can be determined using the formula: 30,000/bpm of conga music

You can determine the BPM of the material by following the tips in this tutorial: How to set recording BPM

Therefore this is the final compression settings for conga using Waves Rcomp: 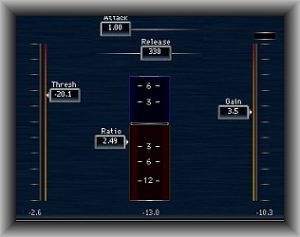 Reverb on conga should just be enough for it to have some ambiance in the mix. In this example, I use Focusrite reverb small bright room presets. You can use any reverb plug-in you like as long as the result sounds good.

Below is an example Conga, bass drum and cymbal percussion mix implemented with the above audio mixing settings.

How to Mix Sitar- the tips

Sitar is an Indian musical instrument. This is how a Sitar looks:

I bet you must have listened to Sitar. You can hear them a lot in Indian and Middle East based movies or a Hollywood film with Middle Eastern theme. Sitar sounds similar to an overbending “high notes” acoustic guitar.

I received an inquiry from a reader as to how would I mix Sitar in a recording project? Well, the mixing tips are still the same. In your multi-track editor, once you have recorded the Sitar very well, you should start Eq’ing the tracks then apply Compression.

The mixing objective really depends on what type of material you are mixing:

OK, if it is a solo performance of Sitar, you really do not need any mixing and compression at all. Just leave the performance like it was recorded, Sitar sounds really unique and full when played alone.

However if it is an instrumentation performance with percussive background, you might want to position Sitar in the center of the mix (pan to the center) with percussions panned to either right or left.

It is because when you see them live, the percussions are on the right or left of Sitar. You do not need to cut or boost frequencies for Sitar in this case, so no EQ settings needed. However you do need compression to make the softer notes of Sitar sound stronger.

Use the same compression settings for guitar found in this guide: https://www.audiorecording.me/audio-compression-tips-for-mixing.html

Things start to become critical when a Sitar is played along with the vocals. The vocals will most likely be drowned with Sitar, because they fairly occupy the same frequency spectrum. In this case, if vocals seemed to be a more important track in the mix, you execute these EQ settings in your mix:

Do the same for a performance with Sitar along with different instruments. You do not need to worry about the bottom, because Sitar does not have much bass, when you listen it playing live. So you need to deal with high frequencies only. As a rule of thumb the Sitar is occupying a higher frequency compared to acoustic guitars; but a little lower than a violin.