A clean guitar does not have any effects. And sometimes it can be tricky to mix. This is a simple tutorial on how to mix clean guitar and apply some reverb on the guitars.

If you have read the tutorial on mixing electric guitars using double tracking. It requires only one guitar take and it’s done. In this tutorial, every guitar take is done twice. This naturally adds the delay because no two recordings are exactly the same. The delay differences between the two tracks sound great in the mix especially if you pan one track on the left and the other on the right

To do a simple overdubbing of clean guitars using DI technique follow the steps below (DI method is recommended for recording clean guitars):

1.) Plug the clean guitar sound to your audio interface input (no effects).
2.) Get the record levels right (-16dBFS to -6dB maximum peak). And configure your recording hardware and software to record at least 24-bit/48KHz.
3.) Hit the record button to record the first guitar take.
4.) Then do another take playing the same music piece.
5.) What you have in the end are two guitar tracks. Although they sound similar, they are not exactly the same because of naturally added delay. For example below are the completed guitar tracks recorded using Reaper:

Personally I would pan the guitar plucking and specialized guitar solo on the hard right and hard left. These correspond to settings (-100, +100) on your audio mixing software. Sometimes they labeled it as percent (-100% or +100%).

Then for guitar strumming and rhythm guitar, I would pan them at 50% left and 50% right. In mixing, I use Adobe Audition although you can use any mixing software. Below are sample guitar tracks panned using the above setting: 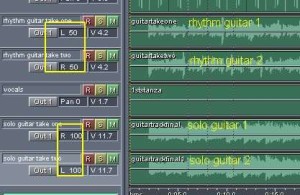 Even with perfect take. The guitar needs some EQ to sit properly with the rest of the instruments in the mix. I use Q3- Paragraphic Waves plugin to EQ them in the mix.

Supposing the rhythm guitar track is a steady power chord strum while the solo guitar tracks consists of low to high guitar notes. Then I EQ them as follows: 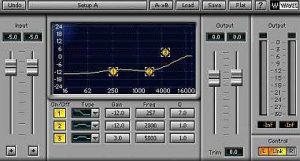