The Gig Setup for Recording Cajon and Other instruments

The SM 58 output of the acoustic drum box is then feed to the Laney power amplifier. Other musical instruments can also be connected to the Laney amplifier. Then you will tweak its settings first to get the best sound for recording. Important settings are the EQ and effects.

Once you get a great sound; its time to put a microphone to the Laney power amplifier. This time, I am using a Rode NT1A condenser microphone to capture both the low end and the high frequency range of the recording very well.

Micing a power amplifier can be tricky. Laney AH200 is around 165 watts (can be very loud!) so you won’t be putting the condenser microphone directly on the cone of the amplifier. Instead, to get the best sound you will put the microphone somewhere farther up, like shown below: 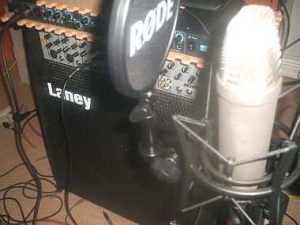 This will also capture the tight ambiance if you are recording in a small room. I then connect the Rode NT1A to Saffire Pro40 audio interface. I switch on the 1-4 +48 volt phantom power switch and switch on the “Inst” button to amplify the instrument level microphone signals.

Finally I opened up Reaper digital audio workstation and watch the levels to make sure it won’t clip. I do the adjustment on the gain of the Saffire Pro40 pre-amp inputs. I then hit the record button after finalizing the settings.

This is what it sounds like with the recorded cajon drum box and a bass guitar together (no digital effects applied, no EQ and normalization applied on the DAW):