One of the most important electrical characteristic of speakers is the impedance. Actually think of impedance as the opposition to electrical current flow. You should keep in mind the total impedance of your overall speaker system when wiring them. The speaker impedance rating is included in the speaker specifications. Since most speakers are rated at 8 ohms impedance, it is not safe to assume that all speakers have 8 ohms impedance rating. You should take a look at your speaker manual that list the impedance specification. For example one of the best PA speaker systems available; the Behringer Eurolive B215XL 1000-Watt 2-Way Pa Speaker System

has the following impedance specification listed on its manual: 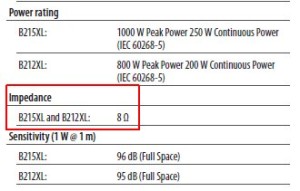 How to read impedance rating from speaker manual

Thus it is shown to be in 8 ohms. On the other hand, car speaker systems tends to be rated at 4 ohms much lower than those commonly used in home studio PA speakers. In stereo speaker system, you will be using 2 speaker units each rated at its specified impedance rating. In large speaker implementation such as in concert venues and live shows, you might be using more than 4 speakers to 8 speakers connected to your amplifier. To give you a quick background about connecting amplifiers, mixers and speakers together, see a sample schematics provided by Behringer: 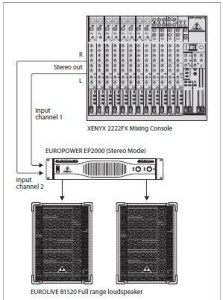 how to connect mixer, amplifer and speakers

As you can see, it all starts with the audio mixing console. The mixing console conditions the audio input sources and the sound engineer will be adjusting settings to provide the best sound possible in the output. This audio input sources could be musical instruments of the live performing band or the microphones from the choir. Then the stereo output of the mixing console is then feed to a power amplifier which will apply a gain strong enough to be reproduced in loudspeakers you commonly see in concert venues and live stage shows. Finally the output of the amplifier is then feed to the power speakers.

Two ways how you can connect speakers to an amplifier

The impedance of the overall speaker system depends on the type of speaker connections. There are two ways how you can connect speakers:
a.) Series connection – connect the negative (-) terminal of one speaker to the positive terminal (+) of the next speaker until the entire speaker will be connected. 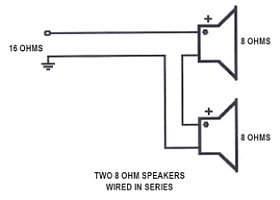 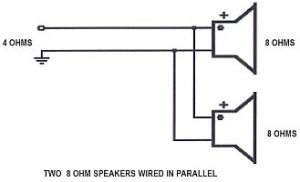 According to Ohms law, the total impedance of speakers (Zt) connected in series is computed by:

You simply add up all the impedance rating of all speakers in series. It is why in the above example of a series connection; the total impedance is 16ohms because:

In parallel circuits, the computation for total impedance (Zt) is using this equation:

Designing your speaker system and keeping it within safe limits

It’s tempting to rush by connecting your speaker systems in either series or parallel without ever looking at specs/manual. If you are lucky, you won’t have a problem but if not; it will permanently damage not only your speakers but your amplifiers as well. The common cause is “overloading”. This is characterized by excessive current flowing to the amplifier and speaker circuit. This mostly will happen if you connect speakers in parallel. It is because as you increase the number of speakers connected in parallel, it will significantly reduce the overall impedance as seen by your amplifier. If the impedance is reduced, electrical current will increase. Therefore in parallel speaker connections to your amplifier; you need to take note of this guideline:

Some amplifiers are not designed to handle greater than that, so better check the amplifier specifications before you can increase the loads. The following are the advantages of connecting speakers in parallel:
a.) Maximum speaker acoustical output (subjectively “loud”) can be obtained because the power is not divided among speakers.
b.) Easy to connect and setup

The advantages of connecting speakers in series:
a.) Safe from electrical current overloading, because the total impedance is summed up. It will always be greater than the amplifier minimum load impedance.
b.) You can limit the power output to the speakers because low current is flowing in the speaker circuit (because of increased impedance). Limiting the power will decrease the acoustical power output of your speaker. This will put less stress to your amplifiers (and also speakers) because it is not heated and delivering high current unlike in parallel connection. As a designer, you can connect speakers with a combination of series and parallel and keeping in mind the guidelines mentioned previously.