This is a tutorial about the best practices of EQ plugins built for Audacity or Ardour in Linux. The method in this tutorial is tested to work perfectly under Linux operating system, although it is not tested in Windows environment. This is based on LADSPA (Linux Audio Developer Simple Plugin API). The name of the plugin is swh-plugins or Steve Harris LADSPA plugins. To enable this EQ plugin feature in your Audacity installation, follow the steps below:

2.) Launch Audacity and load a sample WAV audio file. The most important EQ effect is the “Triple band parametric with shelves”. To use this effect, go to Effect– Plugins 106 to 114 – Triple band parametric with shelves. This EQ effect can be used to do some parametric equalization(band-pass filtering) , high shelving and low shelving filtering tasks which are very important in shaping up the audio when doing mixing.

3.) To demonstrate the usage of this plugin, lets first define what needs to be set using this effect. This is very helpful for beginning users of this plugin who does not have strong background in audio engineering.

BAND-PASS filter – this filter does the actual work of a parametric equalization theory . This is defined in terms of Q (how wide or narrow are the gain/boost reduction, the center frequency and the amount of db to be cut of boost. This is called “triple band parametric with shelves” because it allows you to use this EQ for low shelving, high shelving and band-pass filtering tasks. Actually this EQ features: one low shelving filter, one high shelving filter and 3 band-pass filters. Practical example: Supposing you will use the triple band parametric to curve out the audio with the frequency spectrum below: 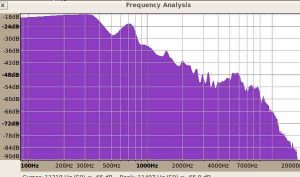 And you would like to apply the following EQ settings:

This is how the settings are done in the Triple band parametric EQ with shelves: 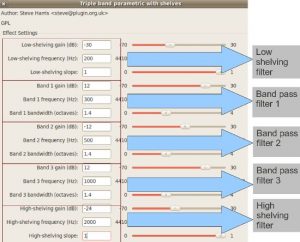 After EQ adjustment, when you check the frequency spectrum of the resulting audio, it will look like below: 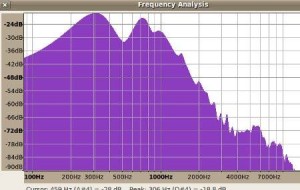