Once the mixing has been done, you will need to master the tracks. Now for your question: Would I need a different set of frequency standards for the parametric equalizer to master the kind of project that I am talking about, and if so, can you provide me some insight into those settings?

The answer is yes. First, make sure you are following the correct audio mixing levels and headroom in preparation for mastering. Second, the bit depth and sample rate of the audio during mastering should be at 24-bit/96KHz. Once these two requirements are complied, below are the 3 easy mastering tips that could improve the quality of your work.

Step1.) EQ Implementation for customized response – using parametric EQ for most projects, a slight wide boost at 50Hz Q=0.8 +3dB can help brought out a rather overall weak bass mix. However the bass level in your provided mix is already at an acceptable level so this is not a serious issue. For high-end EQ, you might want to implement +2dB 12500Hz Q=0.8 wide boost. This would bring up the rather weak treble response. In your master, I observe a small weakness in the treble response. So I would rather boost it up a bit. You mid frequency range is not a problem. The music used by cheer dancing mainly focuses on the beat (the bass and treble is very important) rather than the mid-frequency (that is mainly composed of the vocals).

Step2.) Limiting – this is a technique that you can use to bring your music as loud and as big as possible. There are some tools that you can use. My most favorite is Waves L1 plugin.

To implement this in Adobe Audition mastering:

a.) Get the current loudness level. Go to Analyze – Statistics.
b.) Take note of the “Average RMS Power” data. This is the volume level of your track after implementing EQ on Step1.
c.) Compute the amount Threshold for L1 using this formula (this formula works only for cheer dance music):

Threshold = Average RMS Power (either left or right channel) + 11dB
If the average RMS is -19dB then the threshold:

d.) Implement the threshold in the L1: 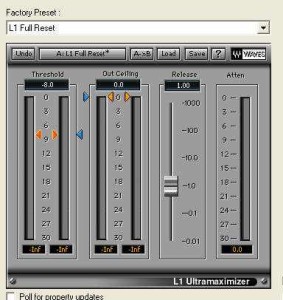 To reduce the incidence of clipping, you might want to reduce the “out of ceiling” options from 0 to -0.2. After implementing limiting, the re-check for statistics and the audio should be averaging somewhat -11dB, it will now sound big and loud.

Finally once it is distortion free, you can reduce the sample rate first from 96 KHz to 44.1 KHz using Voxengo R8brain. And then follow it by dithering (reducing the bit depth from 24-bit to 16-bit). You can read the details in the how to use dithering and sample rate conversion during mastering. If you want to distribute your cheer dance mix in MP3, you might want to convert the 16-bit/44.1KHz wav file to high resolution MP3 using LAME. You can add a LAME MP3 encoder in Adobe Audition.