You can read more about this topic on understanding the sound recording copyright.

3. Mechanical rights – after completing your film project. You might need to burn it to several copies of DVD which you might sell to movie shops or even distribute it to other people. The reproduction of recorded medium (DVD, film strips, CDs, video cassette) requires you to acquire mechanical rights from the music publisher of the song/ music. If you do not plan to distribute your work along with the licensed music then you do not need to acquire these rights.

In most cases (such as in Hollywood film projects), they are released and distributed to several copies (DVDS, VCD, film strips), so they should need to acquire mechanical rights. Bear in mind that independent film makers do not distribute their movies to the public. They are provided to movie distributors. Thus the film makers are not the one to obtain mechanical rights but only the distributors. The distributors would do the actual work of distributing the movies to several copies and have it available for sale.

If the music publisher is Harry Fox affiliated, then you need to arrange and get permission from them. Otherwise if the music publisher is not affiliated you need to contact the publisher directly. The licensing fee depends on the number of copies to be sold or distributed. For example, the distributor would be paying high mechanical licensing fees if thousands or millions of copies would be distributed. Permanent digital downloads are also included in mechanical rights licensing.

Learn more about this topic on this post about what is a mechanical license agreement.

4. Performance rights – once the project has been released to the public (like shown in theaters), the music will be publicly performed along with the movie. Thus, any commercial use should pay performance royalties. However as an independent film maker, you are not responsible for this but only those commercial venues that publicly show your film. In this case, movie theaters, cable channels and television stations which are the ones releasing or using your film project will be the one to pay performance royalties not you. Read more about this in public performance music license. 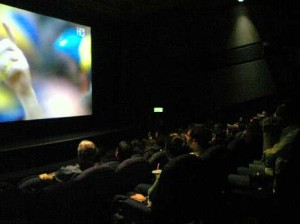 watching movie in the public

Sync Rights – required all the time. So every independent film maker should clear these rights with the music publisher.

Master use rights – required as well. You need to ask permission from the owner of the sound recording which in this case might not be the music publisher or the songwriter of the song. You need to double check.

Mechanical rights – required. You need to clear this right so that the music and your film can be distributed in copies (DVD, hard drive, CD, blue ray, etc).

Performance rights – not required, unless you are the one that will be publicly perform the film in the public. In most cases, you are not.

In other aspects, you also need to ask permission about adaptation rights, so that means you can edit and adapt the song to whatever it suits with the film. This also needs to be negotiated with the music publisher. If you are showing the lyrics of the song in the screen, you need to be granted with print rights by the music publisher.