You have noticed that it’s the heavy metal music which is the most popular form of rock music. And this is followed by alternative rock, punk rock, Christian rock music and death metal music.

Like Rock music, country music also has a lot of different sub-genres. Let’s see what the most popular sub-genre for the following choices:

And this is the result: 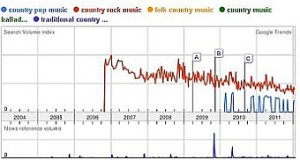 It shows that the strongest sub-genre of country music is country rock and pop. The rest did not have significant popularity compared to this two.

1.) If you are a songwriter/publisher needing to maximize the exposure of your music catalog. You need to target the most profitable genres which are the following: rock and country music.

It might be worth the investment and time of producing country music style out of your original-written songs if you are targeting songs to be performed by a solo artist.

If you are a songwriter and a band member, rock would be lucrative genre for your band as you have a lot of opportunities due to the high amount of listeners, fans and followers of this genre.

The pop music is still popular but it seems that the “majority” of people nowadays are more inclined to listen to rock and country for primary reasons:

a.) In rock and country music; it seems the artists songs are more meaningful compared to those found in hip-hope and RNB. They can write captivating songs with catchy hook and lyrics (read: How to Write or Make a Hit Song). This can easily attract most people attention and a wide variety of audiences (old, young, female and male audiences). Some genre like hip-hop and RNB are only popular to young audiences.

In addition, most rock and country musicians are great live performers and can play an instrument.

b.) Think twice of the genre you need to select. Sometimes this requires expertise in your part. This includes your singing and performing style.

2.) Write songs that can be classified as more than one genre. For example you can write a song that is more of a country rock feeling, so that it can be classified as both “rock” and “country” thus allowing you to market the songs in two genres instead of one. You should focus on writing really good songs. You can learn the 6 most proven hit songwriting tips. Those tips provide some guidelines on writing good songs.

This would allow you to maximize the exposure of your song in both of these highly popular music genres.