FFADO is the Linux Free Firewire audio drivers. This is required when you like to use a Firewire audio interface in Linux such as Saffire Pro 40. Jack is an audio sound server in Linux that would be useful for low latency recording. This tutorial was written for Ubuntu users that would like to install and compile the latest version of FFADO and JACK using Ubuntu 11.10. This tutorial does not include steps on how to get your Firewire audio interface working. It will be covered hopefully in the coming tutorials.

One of the advantages of installing directly from the source (to get the latest FFADO version) is to test if it can now hopefully support your Firewire audio interface (which is not supported in the older FFADO versions). Be warned though that installing from the latest source is not a stable release. So if you have incompatibility issues with your devices or other software, you can revert to an older version.

Step1.) Make sure no other FFADO installations or JACK in your system. You should avoid multiple installations as it can result to serious problems. Simply go to Ubuntu Software center and type each of the following items:

If you see a green check mark on the item, it means they are installed. Simply click the “Remove” button to uninstall. If it shows warnings of other dependent programs, remove them as well.

Step2.) Make sure your Firewire audio interface is turned off (not powered) but connected to your computer via the Firewire port.

Step3.) Install all the required dependencies. Search each one of them in the Ubuntu software center; make sure they are checked (means installed). Install them if they are not checked. 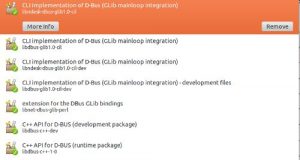 Step4.) Press Control-Alt-T to launch the Terminal. Go to your desktop by issuing the command ($ is your prompt):

And then make sure you are now in your Desktop by issuing the command:

Step5.) Now type the subversion command to download the latest FFADO source code from the trunk:

The above commands would create a new folder called ffado-svn in your Desktop that will contain the downloaded files.

IMPORTANT: To easily uninstall ffado installed using this method, do not delete this folder in your desktop until your firewire interface is fully working (you can record and play).

Step6.) Now go inside the ffado-svn folder by typing this command:

The building process would check for dependencies. There are times when it reports for missing dependencies and it fails to build. You need to install it (from Ubuntu software center). Before running scons command again (after you have installed missing dependencies), issue this command first in the terminal.

Then run scons until all dependencies are satisfied.

You are required to enter your Ubuntu password. After installation, type:

Step9.) Install JACK for FFADO. First make sure you are in your Ubuntu desktop:

Then enter this command: