Quick Tip:
Be sure to keep your loops/samples at even bars like 2,4,6,8. (Looping an uneven sample in an even time-based track will be impossible to line up perfectly.)

Now that the sample is almost ready there is one more thing to ensure before we export it.

Volume. Most DAWs have a meter that indicates volume. You want it to be loud, but not clipping. The idea is to be set at Unity Gain. Unity Gain = 0dB. Db = decibels. 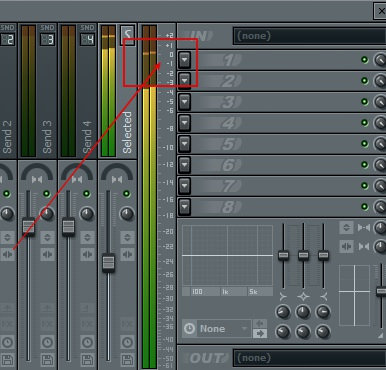 The hardest and loudest sound should not exceed 0dB. Go ahead and crank it up, anything above that and you will likely hear distortion, the same sound you hear when someone turns up their stereo too loud and it sounds blown. You want a clean and clear high-quality sample.

When generating a percussive sound that isn’t sensitive to a specific tempo or BPM what you have is referred to as a “one hit.” The actual sound wave looks like this.

After the sound has come to an end there is a tail of silence. This sound took up 2 bars in a 4 bar measure. To fix this you simply “cut the remainder”.
This will cut the render at the end of the last bar. Once the sound stops, it stops. This can also provide a seamless loop. A sound played over and over with no gaps, pops, or changes when repeating itself.

Other options will be to “leave the remainder” which is good to make sure any post sound effects are still there. If you use a delay and the echo fades away if you were to “cut remainder” you would then lose that after effect. You can also “wrap the remainder” which will take any decaying sounds at the end of a song and put it at the beginning.

Now begins an educational moment on sound quality and formatting.If you don’t know it, it may seem confusing at first but it makes a huge difference. The difference can be heard if you have ever downloaded music from the internet. Depending on who uploaded the song and how they did it determines the sound quality that makes its way to you. Have you ever got a track that the volume was a lot lower than the others? Or ever hear a difference between the downloaded version and the hard disc copy? (I will keep this short and sweet, however, do feel free to research the topic, it gets very in depth.) The first reason for sound differences in audio is dependent upon the format.

Lossless formats use compression algorithms that preserve audio data so the audio is exactly the same as the original source. The most popular and universal lossless formats are .WAV and FLAC. While the quality is there they are generally larger in size.

Lossy formats have a greater reduction in file size by removing some of the audio information and simplifying the data. This of course results in a reduction in audio quality. MP3 format being the universal example.

Most formats offer a range of degrees of compression, measured as a bit rate. The lower the rate, the smaller the file and the more significant loss of quality.

We arrive at the point where everything looks good, volume is good, we got rid of any silence, our audio quality is set to be top notch and it is time to hit save.