Phase issues are the results of microphone interference. For example there are two singers (“A” and “B”) performing together at the same time at the same level. When two microphones are used and are placed very near to each other, Singer “A” microphone can pickup the sound from Singer “B” thus causing it to be recorded with a delay. There is a delay because Singer “B” voice arrives at microphone “A” and “B” at different times. See screenshot: 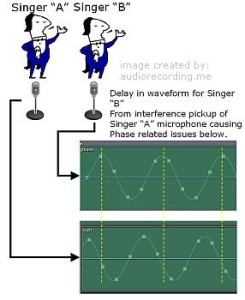 Microphone “A” pickups Singer “B” voices but its delayed with the original waveform as you can see the leaked sound of the waveform does not anymore “in-phase” with the original recording because of the presence of a delay. If this is summed up using an audio mixer, the result is a weak Singer “B” sounds because of phase cancellation. The same thing would happen with Singer “A” on Microphone “B”. Microphone interference is a big problem and if optimal quality in recording is desired, this should be minimized.

3 is to 1 Rule in Microphone Placement Solution

The classic solution to microphone interference causing phasing issues is the “3 is to 1 rule”. This is the statement of the rule:

So the above problem can be resolved using this concept such as shown below: 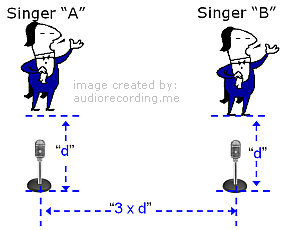 3 is to 1 solution in delays and phase cancellation

If the distance from singer to microphone is 1 feet, the distance between microphones should be around 3 feet to minimize the effect of microphone interference. Although the above example is shown with applications pertaining to tracking vocals; the principle extends when recording any instruments together with more than one microphone. A good example is tracking drums, guitars and other instruments.

It makes sense to properly use directional microphones to further reduce phase issues. A good example of directional microphones is cardioid type. Sounds are pickup strongest directly at the front of the microphone with fewer signals on the side. Thus if you aim them at 45 degree to both sound sources, the interference is substantially reduced. See screenshot below: 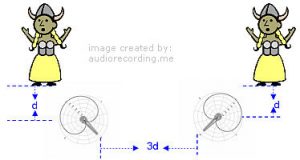 Because of the microphone directional characteristics, you reduce interference on both sides if you tilt the microphone at some angle pointing directly to the sound source. By observing these practices when recording, you reduce phase related issues in your tracking session.