You will certainly have a long way before you become a technical type of record producer. I recommend the following:

1.) Start as a recording engineer or even a mixing or mastering engineer. This will let you get acquainted with how the recording studio operates. Also you will need to become familiar with a variety of recording gears such as the mixing console, compressors, EQ, microphones, etc. And not only that, you should know to operate and use them in your recordings.

If you are home-based, you will find it easier today to set up a recording studio for you to practice. You can read the following tutorial links below to get started:

a.) How to record music at home (building your studio)

2.) And the most important is that once you have created your home studio is to practice recording songs. Try to self-produce some of your works. Having experience is still the best teacher. Take time to read recording, mixing and master related tutorials on this blog to learn some recommended practices of doing them.

3.) Once you master the art of creating good sound out of your recordings, you can then start producing the works of other songwriters. You might want to help them create a professional recording of their own songs.

4.) If you are pretty confident with your skills in producing songs with the help of your studio; you can upgrade your skill set to become a creative type of producer as well.

Skill set for a Creative type of record producer

For example, one of the greatest creative record producers is Sir George Martin. He is responsible for producing many of the Beatles’ no.1 hits. 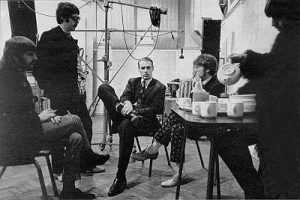 George Martin of the Beatles

Below is the recommended tutorial to get you started as a creative type of record producer who is involved in writing songs.

a.) 6 Most Proven Hit Songwriting Tips

The producer does not need to be a songwriter of the work to be produced. The producer should be able to assess the marketability, strengths and weakness of the artist songs to be recorded.

The producer can give advice to songwriters how to further strengthen a song by improving its hook, etc.

OK, so what are the requirements for both types of producers? Based on my experience, it is listed below:

1.) Lifetime passion for music– you are a music producer, your job is to produce new music. It make sense that you should love music more than any other forms of entertainment. You will know this if:
a.) You find yourself listening and liking music since childhood and almost in a daily basis.
b.) You are fond of collecting recordings of your favorite bands or artist and willing to save money to pay for it.
c.) You both like new and old types of music.
d.) You love to sing even if you are not a talented singer.
e.) You like to play musical instruments; perhaps a guitar or piano.

If you have more passion in watching great movies than listening music; then you are more inclined to become a movie producer/director than a music producer.

2.) You have a vision to create an excellent arrangement for that song. A music producer is not always a songwriter. A music producer is someone that will transform the raw song (in lyrics and melody) into a fully produced recording material. So you should know what instruments, tracks and other effects to be added to further “push” the song to its commercial level.

Think of a music producer like a chef in the restaurant. A chef has all the ingredients inside the kitchen. A chef will decide what ingredients to add as well as the quantity to make a perfect food to serve. A music producer is the same. Instead of dealing with food ingredients, a music producer is dealing with raw songwriting material (coming from a songwriter), instruments in the studio and gears. For example, does this song fits to have a fast tempo or a slow one? Or with a guitar intro or a piano intro? Or with a male or female vocalist? Or with longer or shorter reverb? All these decisions should come from a music producer. All session players, artist and sound engineers in the studio will just follow with what you have in mind.

4.) Understand and master a specific genre– A music producer is further classified either as a rock, country, pop teen, heavy metal or a jazz producer. You should have at least one expert genre. You should know this music genre very well. For example, if you are country music producer; you know that vocals and guitars are extremely important more than other instruments. Another example is that if you are a heavy metal producer, you know that the quality of the drum recordings and the tone of the guitar riff can play a big role in the success of your project. Or if you are a hip-hop producer, you know that the quality of your bass beats can mean success or failure of your album. You can attain mastery by experimentation and listening to your favorite artist in that specific genre.

5.) Producers should know how to distinguish a bad from good recordings. So take time to listen to professionally produced albums so that you will have an idea how it sounds.

6.) “Third ear” for detecting potential hit songs. Just what third eye can let a human person see extra-ordinary things, a “third ear” is important to a producer. You should have the ability to spot great songs in advance. This can be tough as most of the raw written songs does not often sound very nice. But as a producer, you can easily imagine if this song can sound great if it will be “fully” produced.

8.) Producers should know how to manage and motivate the artist as well as the engineers in the recording studio. Professionalism and positive attitude is very important for your success.

9.) Also, regarding the budget of the album or recording. The producer should be able to handle it as well. If you are confused with the finances, you need help from an accountant.

10.) Excellent communication skills. You are required to communicate to the artist, engineer and the label in a frequent basis. Make sure your plans and goals are well understood by your team as you have the overall responsibility of the success and failure of the recording project.

I highly recommend to check out the related tutorials below for more helpful information pertaining to the legal and marketing aspects of being a recording producer.