The compressor formula assuming a De-Esser behaviour would be:

If you are interested to find out the relationships between the input and output levels based on a given threshold and compression ratio, download this Excel sheet.

For example, this a typical compressor behavior with the following parameters: 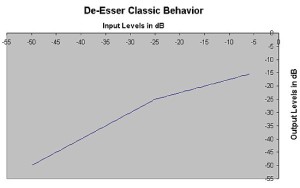 Now you have a clear idea about the basic parameters, incorrect adjustment of attack and release times can also result to incorrect compression. Based on the definition defined in the previous section; attack times is : “the time it takes for the compressor to complete the gain reduction based on the compression ratio”. Ideally, based on the square wave audio above, the attack times should be less than 8ms to effectively compressed the wave which has a frequency of 62.5Hz. In addition, the natural release time should also be less than 8ms to bring back to the normal level once the wave does not need compression. You can picture it out below ( the light gray color are the compressed output):

As you can see in the above compressed square wave, you will notice that if the attack and release times are both set less than 8ms, you will get a naturally compressed wave for a frequency of 62.5Hz. Based on the above analysis, you can deduce:

For the lowest possible frequency:

In mastering since the bass spectrum consist of a mixdown of several bass instruments,(not just one frequency element such as illustrated in the example above) you can assign a higher attack and release times which is around 5 times.The actual setting depends on the audio material being mixed.

B. Typical attack and release times for mid frequencies ( 250Hz to 5000Hz)

This is where the vocal and mid range frequencies are found. Vocals are highly transient and requires fast attack and release times. In this type of frequencies, I would like to use a high safety factor such as 10. The release times could not be actually the same with the attack times since these frequencies are the combination of melodies other instruments:

In practical applications such as in mastering you can use: