Third, the producer/engineer would decide which effects would sound best for that particular re-amped guitar tracks. Thus the guitarist did not need to record over and over again if the producer is not satisfied with the guitar tones, etc because effects can be applied to a guitar tracks without needing the guitarist performance. This saves time and resources.

Fourth, the final guitar tone (with effects) would be routed to an amplifier cabinet such as Laney, Marshall or Fender amplifiers which have microphones on them.

Fifth, the microphones would capture the sound coming from the guitar amplifier cabinets which would be the final/processed guitar sound.

Even after recording, if the producer decides to change it again, the guitarist would not need to re-record; instead the digital recording would be routed back to analog and then re-amped with effects to get the desired sound.

Lesson: Always find ways to improve your current workflow. Sometimes what you have learned in music production schools are not the most efficient method. Be innovative and creative in your approach in recording and you would be successful in the near future.

If you are not familiar with kick drum tunnel, look at the picture below for this setup: 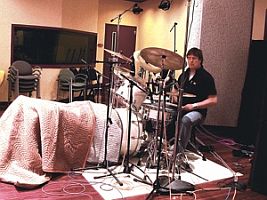 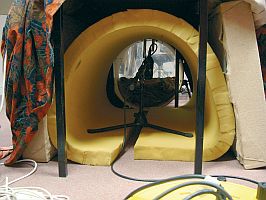 As you see the concept is very simple but very innovative. I do not know who is the inventor of this but this technique are started to come out from the 80’s.

Lesson: As a recording engineer, use your common sense. Kick drum tunnel teaches you illustrate basic principles of audio that if a microphone is placed in an isolated tunnel at a several feet away from the kick drum; it would achieve tight and fat kick sound (with natural ambiance and dryness) because the sound vibrations are restricted within the tunnel space.

Overall summary: As you can see, I have listed the top 3 recording innovations I know. Other engineers and producers that have vast experiences can even provide and describe more than 3 innovations in recording.

If you are just started in recording; do not afraid to experiment and come up with innovations. Experiment to get the sound you want by not restricting yourself with existing and current working methods. Every song is different. It is why you should be creative and innovative to know what’s best for the song (whether it’s an EQ, compression, reverb, etc other settings). There are still a lot of innovations waiting to be discovered. It is your job to discover what’s next.