Now that all important packages/software are installed; let’s test the installation. Follow the step by step procedures below carefully:

1.) Switch on Saffire Pro 40 as well as the studio monitors. When the audio interface is now powered; restart Ubuntu. After the restart, you need to make sure that the system recognizes your audio interface and you have the permission to use it. Follow steps 14, 15 and 16 in this tutorial to install FFADO & JACK from Source using Subversion in Ubuntu 11.10.

Do not proceed with Step2 below if the above steps are not perfectly complied.

When it’s running; do not close the terminal window. You should be able to see “DBUS service running”. If you take a look at the executed lines, you should see the inputs and outputs of Saffire Pro 40 get recognized.

3.) Launch another terminal and run the FFADO mixer. Command:

If all is well, you should be able to see your Saffire Pro 40 mixer control panel that is similar to the one in Windows operating system. Feel free to submit the usage report to FFADO. This is how it looks like: 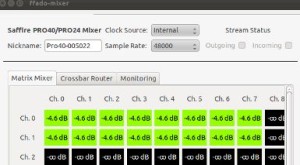 You do not need to touch or edit any of the Saffire Pro 40 mixer configurations. Leave it with default settings for this test.

Configure JACK for Saffire Pro 40 by clicking “Setup”. Configure as shown below (make sure the driver is set to Firewire and set other parameters with the values shown below): 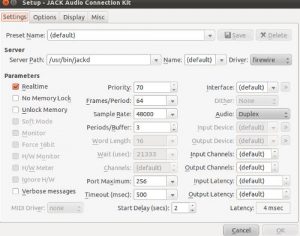 As you can see the latency provided is 4ms which is OK. Press OK to save the changes.

5.) Hit “Start” on JACK. There should be no errors. For the first time, the “FW active” LED on your Saffire Pro 40 hardware would emit a green light; indicating a successful Firewire communication between the hardware and your computer. This is the JACK screenshot showing it is started:

6.) Let’s do a test recording. Plug a musical instrument (acoustic guitar for example) to Input 1 of your Saffire Pro 40 and set the gain knob to around 30% to 50% of the maximum. Click the “Inst” button also on Input 1. Play the guitar and you should see the Input 1 level meters moving in response to the received audio signal from your instrument.

7.) Launch Ardour and let’s do a test recording. In New Session, assign a name e.g. “test”. Then click “New”. There might be some warning errors like ALSA driver not found, just ignore and close them.

9.) Hit both the record button of the added track as well as master record button. See below (enclosed in yellow): 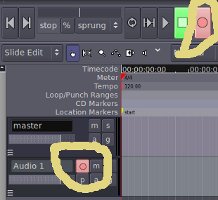 The master record button would then blink.

10.) To start recording, hit the play button. Play your guitar and the waveforms would then start to appear on Ardour. See below:

Below is a sample recording made with Saffire Pro 40 in Ardour using Ubuntu 11.10:

If you encounter some installation and configuration issues , leave a comment below.