In this post, an experiment will be conducted on the effects of MP3 quality in relation to dithering and sample rate conversion which are done in the mastering process. The tools used are the following:

Objective and Methodology of the Study

This study will aim to investigate the results on the following combinations (using free/open source tools):

Test Flow#1: The quality of the MP3 as result of direct conversion

Test Flow#3: Sample rate conversion and dithering to be done entirely by R8brain

Test Flow#4: SRC (Sample rate conversion) is done first but no dithering has been externally applied. Then the 24-bit wav is inputted directly to the LAME encoder. 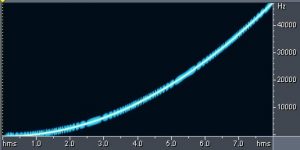 Since the sample rate is 96 KHz, it can accommodate signals up to 48 KHz as the maximum depicted in the plot. According to Nyquist theory on the post on 44.1 KHz vs. 48 KHz audio recording sample rate.

Beyond 20 KHz, human ear cannot anymore distinguish or detect these ultra-sonic frequencies but flying bats do.

In this test, a high resolution test tone of 24-bit/96KHz is directly feed to the Reaper LAME encoder (File – Batch File/Item converter). In Reaper, these are the options: [sample rate=source, channels=source, re-sample if needed=best, Output format=MP3, mode=maximum bit rate/quality]. If you are new to Reaper, you can add MP3 functionality by reading this guide on Reaper DAW Tutorial. And then go to the “Using MP3 with Reaper” section.

For the above test; this is the spectral result of the MP3: 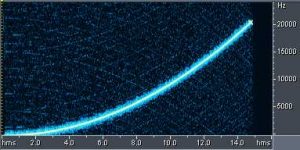 As you can see, very small artifacts are now present and the background is not anymore pure black. This indicates the presence of slight aliasing distortion (those light hazy blue lines) brought by the MP3 encoder sample rate conversion. It is worth noting that LAME encoder converts a 24-bit/96 KHz sample rate to a 16-bit/48 KHz mp3. If it’s directly converted to a standard 16-bit/44.1KHz MP3 using the same process, this is the result: 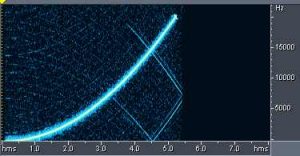 And now you have much bigger problems of aliasing distortion; fully obvious and more audible. See those lines crossing the ideal signal which are not present in the original test tone? These are distortions/artifacts that can make your MP3 sound bad.