In this test, the original test tone is down-sampled first from 96 KHz to 44.1 KHz using R8brain. The output bit depth is set constant/unchanged at 24-bit and quality is set to “very high”.

Then the R8brain output is now 24-bit/44.1KHz is dithered using Reaper (File – Batch file/item converter). Sample rate and channels is set to source. Output format is set to wav while Dither and Noise shaping are checked. The WAV bit depth output is 16-bit PCM.

Finally the 16-bit/44.1KHz WAV test tone is then converted to 16-bit/44.1KHz MP3 by setting at maximum bit rate/quality which is 320kbps. This is the result: 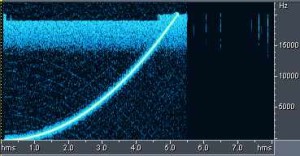 The Reaper dithering introduces substantial noise around 15000Hz. These are called dithering noise. For songs with critical high frequencies (such as vocals, cymbals), the dithering noise can interfere at this frequency range. However, there are no serious aliasing distortion issues in the MP3.

Test Flow#3: SRC and Dithering by R8brain only

In this experiment, the Voxengo R8brain is used for both dithering (by setting output bit depth to 16-bit) and sample rate conversion. The 16-bit/44.1KHz output is then converted to MP3. This is the result: 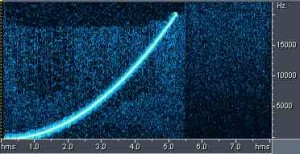 As expected the noise is spread out throughout the spectrum even to middle frequencies where human ears are sensitive. This is because R8brain free does not have any noise-shaping functions for dithering.

Test Flow#4: SRC by R8brain and no external dithering

In this last test, sample rate conversion is done first by R8brain then the 24-bit/44.1KHz output is directly feed to the Reaper LAME MP3 encoder. The output is now 16-bit/44.1KHz MP3. This is the result: 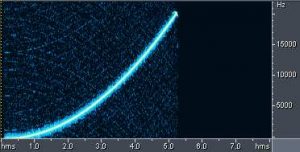 It is amazing to know that there is no significant dithering noise (unlike in previous tests). Aliasing distortion is also very minimal due to the fact that it has been SRC with R8brain before converting to MP3.

Based on the above study, you can conclude that:

a.) LAME mp3 encoder internal sample rate conversion does not perform very well. It is shown by converting from 96 KHz sample rate to 44.1 KHz and there are serious aliasing distortions in the result.

b.) LAME mp3 encoder does a great job in eliminating dithering noise in the mp3 result as shown in Test #4 where a 24-bit/44.1KHz test tone is feed to the LAME encoder yielding a 16-bit/44.1KHz standard MP3.

c.) Using other dithering tools like in Reaper, R8brain, etc. adds more dithering noise than the LAME MP3 encoder itself. Although there are other great dithering algorithms, the study shows that you should not need to dither your high resolution masters to produce a high quality MP3.

Therefore below are recommended for best MP3 conversion quality:

1.) Perform sample rate conversion first on your high resolution masters before the MP3 encoding. Use a quality SRC like R8brain (even free version would do). Do not enable the dithering feature.

2.) You do not need to dither the high resolution masters (e.g. your 24-bit masters) before MP3 encoding. LAME MP3 encoder does a great job in eliminating the dither noise brought about by the reduction in bit depth (from 24-bits to 16-bits) as shown on the above test.

3.) If your target audio would be used in video and film projects (where 48KHz sample rate are common), it would appropriate to use the Test#1 procedure where a high resolution audio such as 24-bit/96KHz would have a cleaner MP3 at 16-bit/48KHz 320kbps. This can be done by directly encoding the high resolution master using lame mp3 encoder without passing to external SRC or dithering.

3.) The standard/recommended workflow for most projects would be (your tools would vary):

4.) An in-depth “listening” test would be recommended for critical audio projects. So after mp3 conversion, you can do an A-B test (dithered or not dithered) and decide for yourself.