Update June 4, 2012: Aside from tracking everything to zero. You can save your WAV files in broadcast wave format and embed the time offset data on each file. In this way, when you transport these files to a different DAW, you can synchronize/assembled them again using these data. If your DAW or recording software does not support this feature, you can still use the method discussed in this section.

One problem remains, see the recorded tracks assembled below: 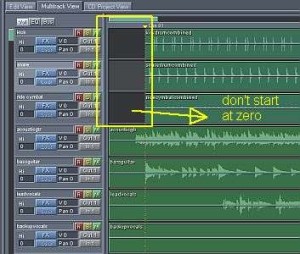 Start everything to zero

The first three tracks don’t start at zero. When your recorded tracks are to be mixed by another engineer, it would be load up in audio mixing software starting from zero. If your tracks for mixing do not at zero, all tracks would not be synchronized and the mixing engineer cannot do anything to solve it. Make it should start everything to zero to avoid any synchronization issues.

To make everything starts to zero; you simply need to add silence before it. Below are the complete tracks aligned and synchronized to zero: 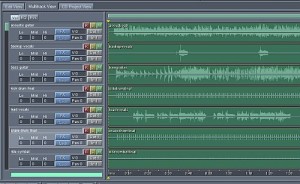 How to synchronize recordings

Place all audio files to be mixed inside a single folder

Before sending all recorded tracks for mixing; you need to place all files in a single folder. Do not include any tracks which are not used by the project.

So when the mixing engineer receives the file for mixing, it will be added in a DAW ready for mixing. The engineer can then starts mixing the tracks and apply some effects. For example, below is how it looks like in Reaper DAW:

To send these files for audio mixing over the Internet or any cloud based solutions, you will need to zip the folder first for convenience. You would only need to send one zip file that containing all tracks to be mixed.