This tutorial is using Ubuntu 10.04 operating system but it can as well be applied with other versions of Linux. This tutorial does not use JACK as the connector. Refer to the steps below:

1.) Go to System – Preferences – Sound and click the Input tab. It should use the “Analog Microphone/Line-In/Microphone” input as the connector. See screenshot: 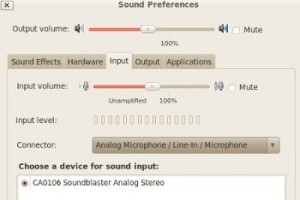 2.) The next thing that you will do is to launch Audacity. Go to Edit – Preferences. Click “Devices” tab. Make sure the following is set:

3.) Click “Recording” tab in Edit – Preferences. Check “Overdub” and the set “Audio to buffer” at 100 ms as well as the latency correct to -130 ms. Uncheck “Sound activated recording”.

4.) Click “Quality” in Edit – Preferences. Select a “Default sample rate” of 96000Hz. You can as well select 48KHz or even 44KHz if you are saving disk space. Select the default sample format of “24-bit”. This ensures the best quality of your recorded sound wave. Screenshot: 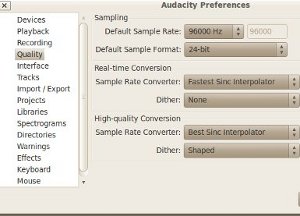 5.) Go to “Tracks” in Audacity Preferences (Edit – Preferences). And make sure that the Default View mode is set to “waveform (dB)”.

6.) It’s time to test if Audacity is actually detecting the sound card inputs. In the Audacity recording environment, look for a microphone symbol. It has a drop down and click on it. Click “Start monitoring”. Screenshot:

7.) Try playing your musical instrument. Audacity should capture the line level inputs from the sound card. Make sure it won’t clip. As a rule of thumb, the maximum peak level should fall below -6dB to avoid distortion or clipping.

You can see it in the Audacity input volume meter above the microphone symbol. If the volume is too low. Adjust your outboard mixer main volume output.

Note: In some rare instances you won’t be able to monitor the output of your musical instrument out of your computer speakers. But you can still record it in Audacity. Make sure the input volume level meters of Audacity are detecting your inputs.

Once everything is ready, you can confidently start the recording. 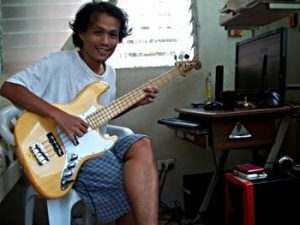 3.) After recording, you should see the captured sound wave on the Audacity editor.

4.) You can as well create a multitrack in Audacity. Simply position to starting line to any part of the audio then click record button.

5.) To mixdown or combine tracks. Select all clips then go to Tracks – click “Mix and Render”. It will combine all your recorded tracks into one.

The default installation of Audacity in Ubuntu does not have an MP3 encoder. So it means that if you are processing a WAV file, you won’t be able to save or export this file as an MP3. You still need to install LAME MP3 encoder in Audacity. The good news is that the installation is easy and straightforward. 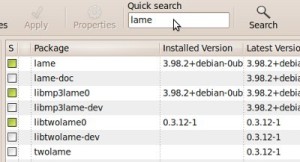 These are the packages to be installed:

After installation, you can see they have a green color marked before them.

Step5.) After installation go to Applications – Sound & Video – Audacity. This will launch the Audacity audio editor.

Step6.) Open your Audacity project (the one you need to be exported as MP3). Go to File – Open.
Step7.) Go to File – Export. Type the metadata (only Artist name and Track title are important).
Click “Add” and then OK.

Step8.) Make sure “MP3 files” are selected. You can click Options to set the MP3 bit rate. Type the file name of the MP3 and then finally click “Save”. Below is a sample sound recording of a bass guitar solo done using Audacity in Ubuntu: