Do not connect your instruments or microphones using unbalanced connections because of noise. Read more about that here.

2.) Look for “Main output”, sometimes in other mixers this is called “Main out”. Connect a TRS cable (this is balanced connection) to your studio monitors. You need two connectors for the Left and Right monitors. 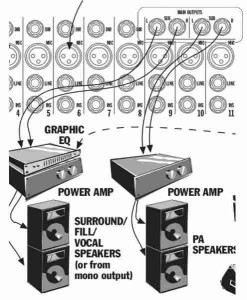 main output in the mixer

3.) If you are using the microphone preamps of your mixer, you will be amplifying the instruments levels. Do not anymore pass the signal to another preamp (such as in your audio interface) because it can distort the signal affecting the quality of your recordings.

Most audio interface has some button to bypass the preamp during digital tracking. See signal flow path below if you are recording using your mixer preamp and audio interface to your PC:

I use this mixer in my recordings for more than 3 years I think. This is one of the smallest mixer available for home studio recordings yet even as powerful and sounds good as a professional mixing console. A mixer like Xenyx 502 are very handy for all type of home studio applications. It’s use goes beyond the normal home recording implementation.

Official documentation/manuals can be found in official Behringer Xenyx 502 website.This is a personal collection of my tips in using this mixer for your home studio.For more general use of a mixer, you can read this guide on how to use an audio mixer.

Back in my old days; I do not use Behringer Xenyx 502 for analog mixing but use this for recording. The signal flow diagram is shown below:

I’m using PCI soundcard before wayback 2005. It works great and if you see the signal flow diagram. Musical instruments output which are very weak are then inputted to the Behringer Xenyx 502 preamp.

It is then amplified and the output is a line level signal suitable for analog to digital conversion (read: “pulse code modulation tutorial“. Before, I’m using a PCI soundcard (which is bad) and it cannot handle full amplification of analog instruments. Xenyx 502 is there to get the job done. All you have to do is to connect your analog instruments to its microphone preamp XLR input (not the line inputs!). See screenshot below inside the yellow box: 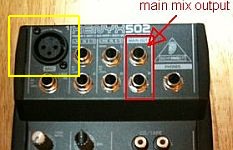 By doing this, the signal input will be feed to a microphone preamplifier. If you connect your instruments directly to a line input in the mixer, it will bypass the pre-amplification stage and your signal does not sound good.

Do not disturb the EQ (set it flat) and adjust the main mix volume, enough to get a good recording level in your digital recording software.

However you can always boost/adjust the signal in Xenyx 502 mixer using #1 Gain level knob (provided you connect the instrument to the Xenyx XLR microphone preamp input). Adjust it until you get a good recording level. The weak signal would be amplified to line-levels.

This is particularly useful if you ran out of preamps in your audio interface.

Tip #2: Use balanced connectors and cables when connecting to preamp

Xenyx 502 can accept XLR microphone inputs. Whenever as possible, use balanced connectors. This will result to low noise when using the mixer.For example when connecting microphones to a mixer, below is the configuration flow:

For more details on this topic, read this tutorial on balanced and unbalanced audio guide.

Tip #3: Unplugged the power supply immediately after use

Since these are made of solid state devices, unfortunately these are subject to various stresses that affect the reliability of the electronic components in the mixer. One of these frequent stresses is electricity.

If you will not unplug the mixer from the AC source, then you are allowing some electrical energy to be stored or consumed by the mixer, which speeds up the degradation of the components. This will worsen if in any even the AC line gets shorted or there are spikes, and then you have no surge protector.

It is better if you can take away the dust on the Xenyx 502 surface if you are not using it for a long time.

Tip #4: Always set the volume to minimum when plugging the mixer

This will avoid damaging your speakers, in case a transient loud sound will be accidentally transmitted due to faulty wiring settings or maximum volume settings. This extends to plugging analog instruments to the mixer.