Second Lesson in Remixing: Trust and Respect the Producer/Client Vision of the Mix

I have once a client which has a particular vision and goal as to what the mix should sound like. So they send the recordings of their song to different mixing engineers and get a sample of their work. One of the mixing engineers hired was me.

So I sent to them a sample results. Then they provide a feedback that it was the first time that the vocals sounds so clear but they like the instrumentation to also dominate the mix. One engineer they hired does the opposite. The vocals were buried in the mix and the instrumentation is dominant drowning the vocals.

So I happily remixed the song and trust the client vision. So I simply cut 2000Hz Q=1.4 -9dB for all string and keyboard instruments other than the vocals before increasing their instrumentation level in the mix. This is to prevent conflicting with the vocals as the instrumentation volume is increased. I send to them the remix version and they are happy and accepted my mix as the best version.

If you are on your first time to accept the client for audio mixing, always be prepared and accept that you will be remixing the work. This is normal and you should take it as a learning opportunity.

Now you made several remix version of the song; you should never delete the old mixes and always backup those files. Why?

1.) There might be chances that you will not be happy with the new version of the mix so you will be reverting to the old mix.

2.) You might be using some effect settings on the old mix which are not present on the new mix but would like to incorporate it. So if you still have the old session files, you simply need to open it and check what effect settings you are using. If you delete it, you will spend a lot of time figuring out what are those settings.

I recommend you will organize your old and remix session files, project files as follows: 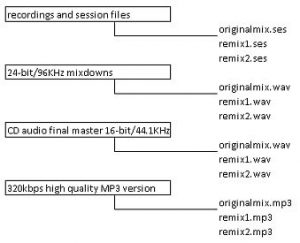