One of the most challenging work for a mixing engineer is mixing rock music. This includes several genres that includes heavy metal, alternative, grunge and punk music. Generally, rock music is always associated with being “loud”, “heavy” , “dense” or “thick” as opposed to being “light”, “gentle” and “smooth” in country and pop ballad music.

The challenge is how you will be able to mix so that the results will be heavy and thick? First, take note that being loud is not an objective in mixing. Making your mix loud is a mistake and it is the job of the mastering engineers. But you can prepare your mix in a way that mastering engineers can easily crank the volume of the music to the max without attaining distortion. These tips are mostly applicable to those recording and mixing at home using a digital audio workstation.

Tip#1: Never roll off the bass of the most important bass instruments.

– In rock music, producers decide what will dominate the bottom (subwoofer frequencies) at 20Hz to 100Hz. There can only be one instrument so that the rock mix won’t have some “mud” related issues.

-Mostly this is the bass guitar, and this has been discussed clearly in the tips on how to mix a bass guitar tutorial with a rock mixing objective.

-The bass is the most important contributing element to rock music “heaviness”. If you are listening legandary rock and heavy metal albums, you won’t feel that its too heavy until you crank up the volume of both subwoofers and your speakers.This all sounds very heavy because of the bass.

-If you roll off both kick and bass guitar frequencies, your rock music sounds very dull. In some rock mix, the kick drum spike sounds faint to give emphasis to bass guitar heaviness that contributes to the overall music loudness and thickness. A classic example is the song “Geek USA” by Smashing Pumpkins.

There are lots of ways to do this. One way is to use a guitar distortion pedal called as “Big Muff”

known for its very heavy guitar sound for recording. Big Muff is also used by Billy Corgan of Smashing Pumpkins.This is how it looks like: 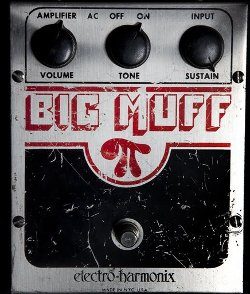 Tip #3: “Natural Delay” between tracks will contribute to heaviness

When you are tracking instruments, as long as you have an acceptable level of latency..it is beneficial to have a natural delay captured between instruments. This will add up to heaviness in the rock mix. An opposite of natural delay is zero delay which is unnatural and artificial to listen, see screenshot below: