3.) Then since you need to add some “airness” to the vocals which would be above 10,000Hz; SM58 automatically adds the boost.

Mentioning the above 3 advantages, you won’t be over EQ’ing the vocals in the mix because the frequency response is tailored for vocal performance. Less EQ means a more natural vocal recording (fewer effects used).

Does this mean SM58 is a perfect solution for recording vocals?

The quick answer is NO. If you look at the frequency response, it cuts low, boost mid to a high level which also adds some sibilance to the vocals. This will not sound good IF:

a.) Your voice is too bassy. SM 58 cannot capture low frequencies very accurate.

b.) Your voice is too pitched at mid-tones with an already sibilant voice. This will worsen if you use SM 58 during vocal recording. Thus, the golden rule in vocal recording is selecting appropriate microphones to where the vocals would sound best.

It is why it’s common in very big recording studios to have a lot of vocal recording microphones because if something does not work for a certain singer, the producer can experiment with several microphones until it sound great.

SM 58 works best for singers with relatively flat and natural response in singing. When SM58 adds some EQ coloration through its frequency response characteristics; these singers would sound best even if recorded with SM58.

But it would sound awful to singers with high mid-tone/sibilant content in their vocals. This makes the vocal EQ work trickier.

It is why a condenser microphone is a common standard for most vocal recording because they have a very flat frequency response. They do not add any coloration when recorded. So this implies that what is recorded mimics the original voice (unaltered). This makes it easy for the engineers to apply appropriate EQ during mixing because the original recording is flatly recorded.

Does SM58 have really been used in vocal recordings for major label album projects?

If you think SM58 is not a great vocal studio microphone, better read below. Yes, there are legendary artists that uses SM58 in their studio album projects:

1.) “Bjork” – she belongs to Rolling Stones list of Top 100 greatest voices. In all of her vocal recordings for an album project; she was using SM58..

2.) “U2” – Bono was recording the band hits from their multi-platinum albums “The Joshua Tree” and “Achtung Baby” using SM58 as the vocal microphone. 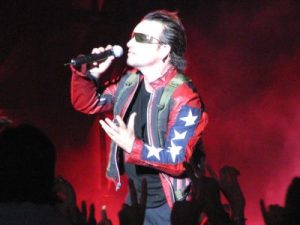 And there are so many more.